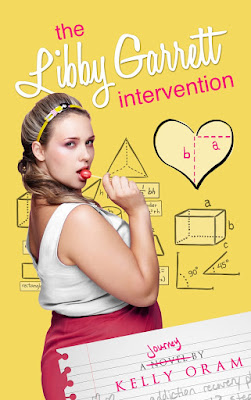 The Libby Garrett Intervention
(Science Squad)
by Kelly Oram
Release Date: 10/24/15
Bluefields Publishing
Summary from Goodreads:
Libby Garrett is addicted to Owen Jackson's hot lovin'. But the sexy, popular college basketball player doesn't appreciate all of Libby's awesomeness. He refuses to be exclusive or even admit to people that they're dating. The relationship is ruining Libby and she's the only one who can't see it.

When Libby's behavior spirals completely out of control, her best friend Avery Shaw and the rest of the Science Squad stage an intervention hoping to cure Libby of her harmful Owen addiction. They put her through her very own Twelve Step program—Owen's Anonymous—and recruit the help of a sexy, broody, hard as nails coffee man to be her official sponsor...

Adam Koepp has watched Libby Garrett for years. How could he not notice the sassy girl with the purple skateboard and helmet plastered with cat stickers? But in all the years he's crushed on her, Libby has failed to take notice of him. Why would she when he was just a nobody high school drop out who served her apple cider several times a week? Especially when she was hooking up with a guy like Owen Jackson—a guy with a college scholarship and more abs than Kyle Hamilton.

Adam finally gets the chance to meet Libby when his co-worker Avery Shaw recruits him to take Libby on the journey of a lifetime. With his ability to play Bad Cop and his experience with the Twelve Step program he's the perfect candidate to be Libby's sponsor. But will he be able to keep his personal feelings out of the matter and really help her the way she needs? And will Libby hate him when he forces her to take an honest look at herself?

This follow-up companion novel to The Avery Shaw Experiment can be read as a stand alone. (But where's the fun in that?) ;)

“Oh, whoa, hold up and stop right there! Are you intervening with me right now? Is this supposed to be an intervention?” Coffee Man’s stare wasn’t going to break, so I looked around the group at everyone else. None of them would meet my eyes. “Did someone cook up something special in the chem lab or something? You’ve all officially gone mental. I’m not on drugs!”

Avery finally looked at me. She shook her head. “Of course you aren’t on drugs, but your relationship with Owen is just as destructive.”

I barked out an incredulous laugh. They were comparing me to a drug addict and saying Owen was my crack? “Are you freaking kidding me?” I screeched. “I came here to apologize to all of you and this is what I get?” I jumped to my feet. “This is such equus ferus feces!”

I bolted for the door and got about three steps before Adam intercepted me, blocking the way like a lean, tattoo-covered wall of attitude. He stood in a typical bouncer’s stance with his feet shoulder width apart and his arms folded across his chest. Though he wasn’t particularly tall or bulky, he was still intimidating. I glared at him. “And you’re a gluteus maximus!”

Adam’s face pulled into a frown and he looked to the group to translate. Aiden grinned. “That’s Libby speak for ‘This is horse shit’ and ‘You’re an ass’.”

Adam brought his gaze back to me, and I kept up my glare, refusing to take it back. I waited for him to flip out on me, but was shocked when his lips twitched as if he was fighting a smile. I had to be wrong, though, because there was no way Mr. Uptight had a sense of humor. “Get out of my way,” I said.

His face hardened again. “You sit that luscious little gluteus maximus of yours back down on that couch right now,” he said, “or I’ll put it there myself.” About the Author
Kelly Oram wrote her first novel at age fifteen–a fan fiction about her favorite music group, The Backstreet Boys, for which family and friends still tease her. She's obsessed with reading, talks way too much, and loves to eat frosting by the spoonful. She lives outside of Phoenix, Arizona with her husband and four children.
Author Links: