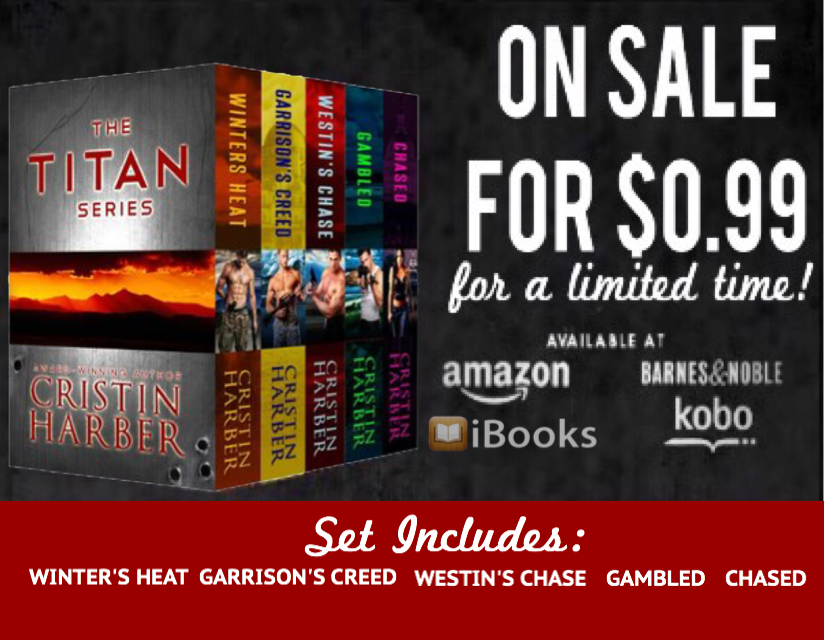 After putting her life on the line to protect classified intelligence, military psychologist Mia Kensington is on a cross-country road trip from hell with an intrusive save-the-day hero. She'd rather take her chances without the ruggedly handsome, cold-blooded operative who boasts an alpha complex and too many guns.

Colby Winters, an elite member of The Titan Group, has a single objective on his black ops mission: recover a document important to national security. It was supposed to be an easy in-and-out operation. But now, by any means necessary becomes a survival mantra when he faces off with a stunning woman he can't leave behind.

When Titan's safe houses are compromised, Colby stashes Mia at his home, exposing his secret--he's the adoptive father of an orphaned baby girl. Too soon, danger arrives and Mia lands in the hands of a sadistic cartel king with a taste for torture. As hours bleed into fear-drenched days, Colby races across the globe and through a firestorm of bullets to save the woman he can't live without.

Nicola is an injured CIA agent on the run from a failed undercover operation. Her escape plan shatters when she slams into the man who buried her a decade ago. Cash Garrison. Her first and only love. Now, sexier than her best memory and cradling a sniper's rifle, he has questions she can't answer. Why was she alive? And armed?

Cash is an elite member of a black ops organization, The Titan Group. He thought Nicola died his senior year of college and swore off love to focus on a decade of military missions. But when she shows up behind enemy lines, bleeding out and wielding a weapon, his heart and mind are unsure how to proceed.

Titan and the CIA join forces to uncover a mole hidden in a network of international terrorists and homegrown mobsters, teaming Cash and Nicola againWhen disaster strikes, Nicola's hidden past makes her the hunted target and Cash's best kill shot may not be enough to save them.

Jared Westin knows his reputation and likes it. He gets the job done. No emotion. No baggage. That's why his elite ops company, The Titan Group, is better than the best. They complete projects classified as mission impossible.

And then, in walks a woman as tough as she is sexy. His counterpart in every way, should he choose to admit it.

Ousted undercover ATF agent Lilly Chase only answers to "Sugar." Jared is the only man who can see past her leather-and-lipstick demeanor, and that revelation is terrifying. She was fired for helping Titan on a questionable arrest she should've ignored, then partnered with Jared's rival on an assignment in Afghanistan.

Saving Sugar isn't a normal rescue operation. It pits Titan against its rival, Jared against his nemesis. Chasing Sugar's heart isn't a simple task, either. She fights him, fights them, always ready to run. Jared must risk his life to save her--the woman whose bravado and surprising sweetness has given him the one thing he never had. Love.

Brock Gamble's epic fall from the Titan Group labeled him a traitor, then his wife walks out the door. Can the couple survive if the only chance of redemption is a fall further into a world of guns and kidnappings?

Jenny Chase and Asher McIntyre: can two hearts on opposite career paths survive while Asher's enemy seeks to destroy them both?

THE TITAN SERIES box set by Cristin Harber is on sale for 99c for a
limited time! http://amzn.to/1NwhU2w
#TeamTitan