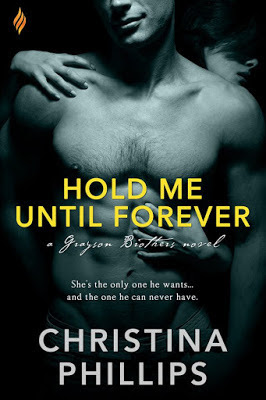 She's the only one he wants...and the one he can never have…
Ella Clark has been in love with Alex Grayson forever. She’s tired of being invisible—or worse, being treated like his kid sister. If she can just get him to drop his iron-fisted control for two seconds, she’ll prove she knows exactly how to blow his mind.
Alex has been fighting his attraction to Ella since her should-have-been-innocent sweet sixteen kiss burned down his world. He's damaged, and there's no way he'll ever drag her into his screwed up life. Until she offers him something he's always craved—steamy, no-strings sex inside his exclusive BDSM club. Where she'll be safe from the darkness that haunts him.
Except there's nothing safe about being with Ella, and the more she gives, the harder it is to let her go. If he stays, he risks everything, but how can he walk away from the only woman he's ever needed?
<!-- [if !supportLineBreakNewLine]-->
<!--[endif]-->
BUY NOW
iBooks | Amazon | Amazon UK | Kobo | B&N

(Ella’s just told Alex that she’s leaving Grayson’s, and Alex has gone round to her apartment to try and talk her out of it…)

Guilt twisted through her again. Before he’d taken her into Grayson’s she’d been floundering, her self-confidence still in bad shape after her mom’s asshole boyfriend had cornered her when she’d been fourteen. Her succession of part-time and casual jobs was nothing to brag about, and the only constant in her life had been her volunteer work at the Wildlife Retreat.

“I’m not leaving you in the shit. There’s plenty of time to find a replacement for me.”

He gave her a smoldering look. Oh, for fuck’s sake… “No one could take your place.”

If only he were talking about her as a woman and not his indispensable work colleague.

“Hate to say it, but you’ll probably be surprised.”

He didn’t immediately deny it, which stung more than it should.

“You plan on staying in touch?”

She couldn’t tell by his tone of voice whether he gave a damn one way or the other. So much for no one being able to take her place. Looked like he was already over it.

Don’t you dare say it. Heat flooded through her, but the words spilled out anyhow. “I might come visit you in your club one night.”

At least it wiped that infuriating, unreadable expression from his face. He stared at her as though she’d just grown a pair of horns.

It was the note of finality in his voice that really pissed her off—as if he thought she was joking and he didn’t find it funny.

“Why not? I think I’d really get off on a night at your club.” Take that. If only she didn’t look so rough. It was hard trying to act like a sophisticated woman of the world when she was barefoot and Alex could’ve stepped off the cover of GQ.

“Didn’t know you were into that scene.”

“There’s a lot you don’t know about me.” Including the fact I sleep in one of your old shirts. At least he hadn’t recognized it. Then again, it was about three years old. He’d left it here when the brothers had helped her move in, and somehow she kept forgetting to give it back to him.

“I would’ve known about this.”

Was he laughing at her? He didn’t look as if he was, but it was hard to tell what he was thinking.

Whatever. She wasn’t backing down.

“I might not be hardcore, but that doesn’t mean I don’t like to experiment now and then.”

“Define what you mean by ‘experimenting.’”

He damn well was laughing at her. What’s the kinkiest thing I’ve read lately? “Ménages.” That’d shut him up. Or turn him on.

“You enjoy having sex with two men at the same time?”

She glared at him. “You find it so hard to believe that two men would want me?”

“That’s not what I find hard to believe.”

His quick-fire response took her breath away. Trust Alex to compliment and insult her in one easy comment.

She cleared her throat, which kind of ruined the worldly aura she was going for, but it was better than choking on her own words. “So, does your club cater for that kind of thing?”

What was she saying? She’d die if he called her bluff.

He didn’t answer right away. His eyes were all dark and smoky and it was suddenly hard to breathe properly. He seemed to be considering her question, which sent prickles of alarmed excitement over her bare skin.

“Excalibur caters for almost anything,” he said.

This is the 3rd book in the Grayson Brothers series. I always recommend reading the series books in order, for full understanding and enjoyment. While this book can be read as a standalone novel, I found it fits with the series really well!

Alex and Ella have known each other since they were kids. Ella has been in love with him almost as long. She is sick of waiting for him to get a clue, so she gives notice to quit the company he owns.

Alex is shocked she would want to leave but understands if she wants to chase her life's dream of working with exotic and large animals. He also finds himself attracted to her more than usual at the prospect of her not working with him.

This book was just so good from start to finish! The characters banter was seamless. The sexy times were HOT! The book just all over gave me the feels!

Christina Phillips is an ex-pat Brit who now lives in sunny Western Australia with her high school sweetheart and their family. She enjoys writing paranormal, historical and contemporary romance where the stories sizzle and the heroine brings her hero to his knees.
She’s addicted to good coffee, expensive chocolate and bad boy heroes. Christina is also owned by three gorgeous cats who are convinced the universe revolves around their needs. They are not wrong.
Website | Facebook | Twitter | GoodReads
Don't Miss the other Grayson Brothers Romances