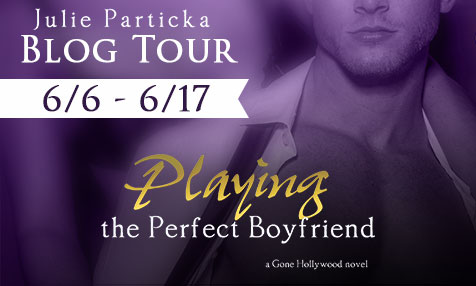 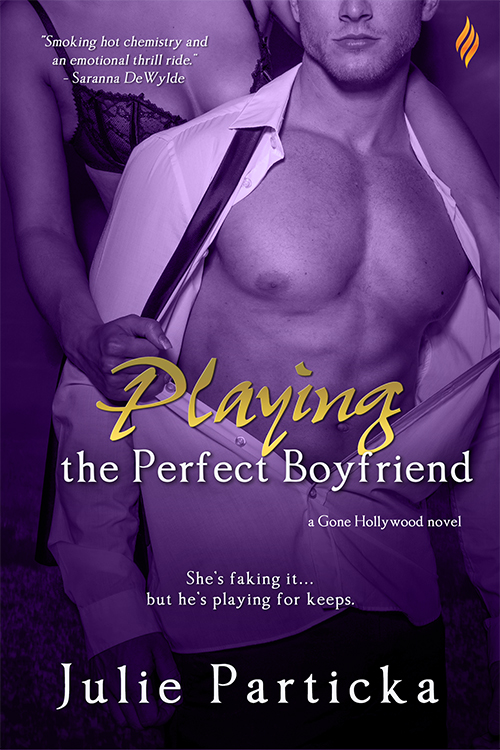 Wild child Jade Easler has never met a dick she didn’t like, but there’s only been one she thought about keeping. And now he’s back in town…right after she’s slept with charming Hollywood up-and-comer, Dean Hartley. The fastest way to get her ex’s attention? Show up on the arm of a sexy younger man. She just hopes Dean is up for the task of fake boyfriend…

When he hooked up with his beautifully curvy photographer, Dean thought he’d only get the one night she promised. But when she needs help convincing a former flame she’s ready to settle down, who is he to argue? He’ll get to show her—in as many ways as possible—that giving up crazy, hot sex for a stale, predictable life isn’t what she wants. And prove that what she needs is him.

“I wanted to surprise you, and when you weren’t home, I came here. I guess I should have known you were entertaining.”

Or maybe Dean would stay after all. The emphasis on Isak’s last word got his ire up and made all his muscles tense. He had no intention of leaving Jade to explain on her own. Something about this felt like she was going to need backup. “Look, buddy—”

“Oh. I apologize if we gave you the wrong impression.” Jade wrapped her arm around Dean’s waist like it was the most natural thing in the world. “We were doing a shoot yesterday, and Dean made a wisecrack about feeling like he wasn’t good enough for me since I’d never let him stay over at the studio. So...we stayed.”

What. The. Fuck? Dean was good at improv, but this wasn’t anything he’d been prepared for when they walked out of the building. Or when they’d woken up this morning. Or...ever.

But something about her words clearly struck Alfredsson, considering the way his expression shifted to one of surprise and a hint of wariness. “The two of you are...together?”

“Of course,” Dean said, hoping like hell he was reading the situation marginally right. “What did you think?”

The way he stared almost longingly at Jade without even meeting Dean’s eyes made two things very clear. One, Alfredsson came expecting her to be available. And two, when he found a guy here, he assumed it meant exactly what Jade had said their interlude would be—a one-night stand. He’d seemed disgusted by the second possibility but disappointed at the idea the first was wrong. Who the hell was this guy to her?

Jade nestled close, and Dean instinctively put his arm around her shoulders. He wasn’t protecting her exactly, but part of him felt like he should. She smiled up at him and said, “I have to assume Isak expected me to be exactly who I used to be, but people change.”

“Clearly,” Alfredsson said. “It is good to see you so... grounded.”

“Thank you. There have been times I’ve regretted how things ended between us, but it simply wasn’t the right time for me.”

They’d been a thing—not just a one-nighter, but a thing. Based on how demure she was acting, Dean had a tough time believing that life with Alfredsson could ever have been what Jade really wanted. He pulled her closer. “I’m glad timing worked in our favor, kitten. I’d hate not having you in my life.”

Jade smiled up at him, but it was tight, forced, like he’d said exactly the wrong thing. “Ditto.” She turned to Alfredsson and added, “Dean and I have to get going, but we really should catch up while you’re in town. How long are you staying?”

Isak nodded, disappointment disappearing behind a mask of professionalism. “That sounds wonderful. I’m in town for about two months. Obviously, it’ll be a busy visit, but I’m more than happy to make time for you.” His eyes shot to Dean. “The both of you, of course. I’d love to get to know the man who stole your heart. Call me. My number hasn’t changed.”

“It was good to see you again, Isak.”

Dean stood there with his arm around her until Alfredsson was out of sight—and hearing. Finally, he was able to let the illusion drop. “Well, that was awkward.”

Jade sagged against the hood of her convertible and buried her face in her hands. “This is a disaster!”

“Not for me.” Dean sat down next to her and nudged her with his hip. “The hottest woman in all of Hollywood is apparently my girlfriend. I couldn’t be happier.”

She snorted a laugh—seemingly back to a shadow of the woman he’d spent the night with. “I am not your girlfriend.”

“Sure you are, kitten. I heard what you told Mr. Tall- Blond-and-Swedish. Also, I should probably know how long we’ve been a couple before we get together with him again.”

Playing the Perfect Boyfriend by Julie Particka
My rating: 4 of 5 stars

This is book # 3 in the Gone Hollywood series. This book can be read as a standalone novel. For reader understanding and enjoyment I recommend reading this series in order.

Jade and Dean meet when he comes to her studio to get his picture taken by her. She needs help to trick an ex-boyfriend, and Dean comes to her rescue. Then he gets to know her, and thinks she is making a mistake.

Dean cannot help but fall for Jade. Only she doesn't seem to want forever with anyone but her ungrateful ex. Can he change her mind before its too late?

This story was full of sparks and heat. The characters banter was so fun. I enjoyed every page. I cannot wait to see what the author come up with next! Great series!


***This ARC copy was given by Netgalley and its publishers for an honest review only.

Julie Particka was told to get serious about her future in Junior High. Several years after getting a bachelor’s degree in chemistry, she realized being serious was over-rated and went back to her first love–writing. Now rather than spending her days in the drudgery of the lab or teaching science to high school students, she disappears into worlds of her own creation where monsters sometimes roam, but true love still conquers all.

She can most often be located in the Detroit area with her favorite minions (the ones who know her as Mom) where she is currently hatching a plot for world domination. It involves cookies for everyone, so she’s pretty sure there’s no way it can fail…except the minions keep eating the cookies.