For the first time in years, Nash wants to let a woman into his world,
but while his loss made him stronger, that strength came at a price. 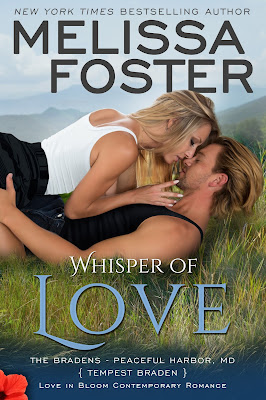 Tempest Braden adores her family and her small hometown, but sometimes too much of a good thing can be confining. At almost thirty, having watched most of her siblings find true love, she’s anxious to experience her own happily ever after, and the move to Pleasant Hill, Maryland, is just the change she needs. When she rents a room from ruggedly handsome, and closed-off, artist Nash Morgan and his adorable son, Phillip, she thinks she’s found a little slice of heaven on the outskirts of town, where she can concentrate on building her business. That is, if she can ignore the undeniable heat between her and the sinfully hot single father.When Nash bought his farmette, he had one goal in mind—to provide a loving, stable home for his son. He never imagined he’d be raising Phillip alone, or renting out a room to keep their heads above water. Then again, he never imagined losing his brother, or spending two years sailing around the world with parents who seemed to forget one son was still alive. Sparks fly from the moment Tempest moves in, and her positive energy and inquisitive nature brings new life into Nash and Phillip’s quiet, confined world. For the first time in years, Nash wants to let a woman into his world, but while his loss made him stronger, that strength came at a price, leaving him walled off and wary of opening his heart again.

The sound of tires on gravel drew his attention. He scooped Phillip into his arms, locked the goat pen, and grabbed the buckets.

“Visitor,” he said, carrying Phillip toward the house and eyeing the Prius parking behind his old Ford pickup truck. His truck was a gas guzzler, but as much as he hated that, he needed the bed of the truck to haul the furniture he made into town. He hoped Tempest Braden, the woman coming to see the room he was renting out, wasn’t a preachy tree hugger. Hell, he hoped she would turn out to be the silent type so he could pretend she didn’t live in their house.

Phillip’s brows knitted, his hands firmly planted around Nash’s neck. He wasn’t used to visitors. The last several people who had come to see the room they had for rent hadn’t been the kind of people Nash wanted around his son. They’d rubbed him the wrong way—too aggressive, too loud, too shady, too flighty. He just needed a stable, responsible person to rent the room so he could afford to upgrade a few of his tools and start saving for Phillip’s future. He tightened his grip on his son and headed up to meet the tall blonde stepping from the car.

Her wispy skirt fluttered around her knees. Large pink roses with muted green leaves looked as if they’d been thrown onto the flimsy white material haphazardly. A fringe of lace lined the edges. On anyone else the flouncy, floral skirt might look immature. But her legs went on forever, and coupled with her tight, curve-hugging tank top, she looked like Sweet and Sexy collided at the corner of Sinful Temptation.

She turned as he approached, and Nash stopped in his tracks, standing still as a stone. The setting sun caught her hair, highlighting several different shades of blond in long, cascading layers that hung to the middle of her back. Her nose was slightly upturned, and she had a cute, rounded chin. He’d never seen such natural beauty.

She smiled and tilted her head. “Nash?”

Shaking his head to clear his thoughts, he forced his legs to carry him forward. “Yes. Tempest?”

She met him halfway up the hill. “Thanks for seeing me so quickly.” She peered into the buckets. “I hope I’m not interrupting.”

“Evening routine. Did you have any trouble finding us?” She was even more beautiful up close. Her hair was tousled, as if she hadn’t brushed it all day, and her eyes were so light blue, they had starbursts of white around the pupils, sparkling like diamonds. It had been a long time since any woman had caught Nash’s interest, and he reminded himself to rein in that attraction. The last thing he needed were complications in Phillip’s life. Even for a girl with the most spectacular blue eyes he’d ever seen.

“No. Your directions were perfect.” She smiled at Phillip, and when she spoke again her voice was soft as a summer’s breeze. “What’s your name, cutie pie?”

Phillip’s fingers dug into his neck. Nash nodded his approval.

Tempest’s eyes widened with amusement. “Flip? That’s a unique name.” That beautiful smile lit up her face again. “I’m Tempest, but everyone calls me Tempe. It’s nice to meet you both.”

When she turned that smile on Nash, his entire body heated up. As a sea lover, he knew the word tempest meant a violent storm. It was obvious what type of unexpected storm this sweet-natured, soft-spoken beauty could cause, and he couldn’t afford to be caught in a squall.

“My son’s name is Phillip.” He said it faster than he’d meant to, and realized his son’s name came out sounding like Flip. He’d also said it harsher than he’d intended. Reeling in his attraction was going to make him look like an asshole.

The way she said it sounded so damn cute, he wasn’t about to correct her.

“Come on, I’ll show you the room.” He caught a whiff of her floral perfume on the way inside. It had been a long time since he’d smelled anything so feminine. Maybe this housemate thing wasn’t such a good idea after all.