Book Blitz w/Review - One Night With A SEAL

Navy SEAL Zane Bennett isn’t one to turn away from a challenge, but he’s determined to win the bet he has with his twin brother. Will he win the bet, or lose his heart to the woman of his dreams? If you loved, UNDER PRESSURE by Lori Foster A SEAL’S PLEDGE by Cora Seton you’ll devour with ALL OUT by Tawny Weber. 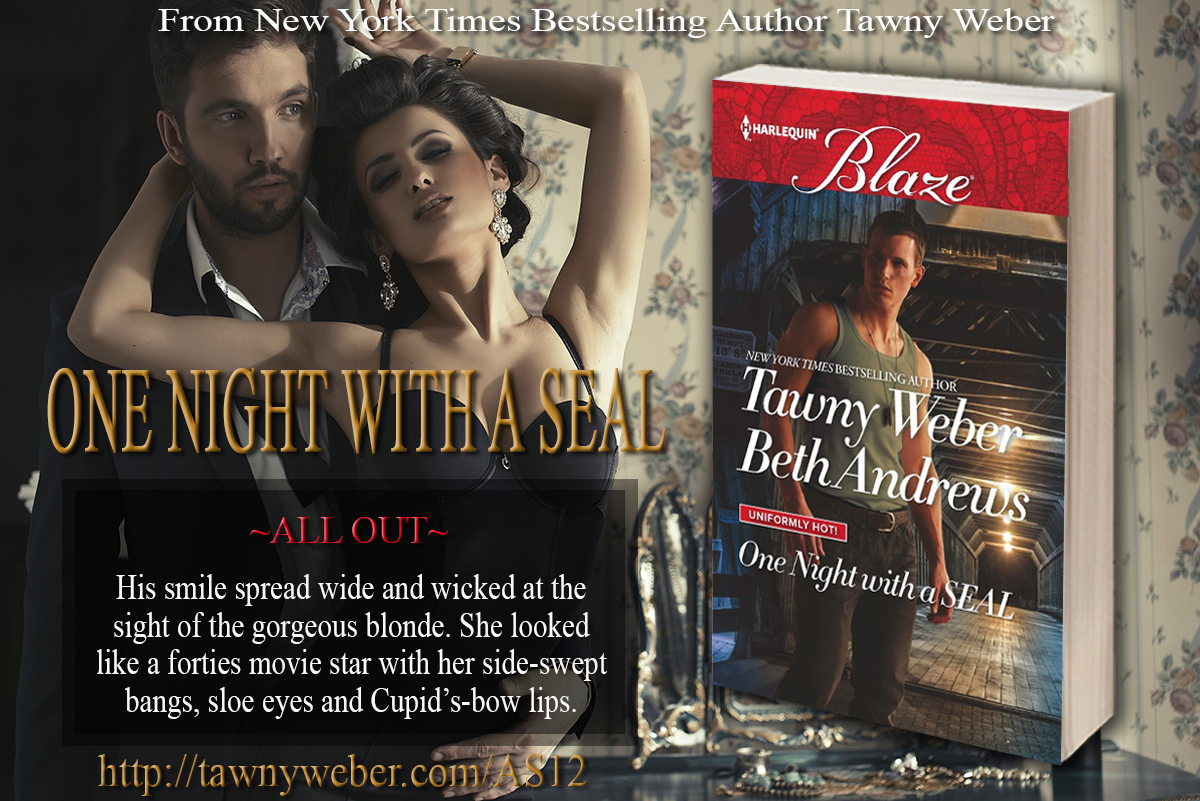 ALL OUT by Tawny Weber

Navy SEAL Zane Bennett can't walk away from a challenge. He's determined to win a bet with his brother—until he collides with the luscious Vivian Harris. Their attraction is immediate and searingly hot, but Zane can't bring himself to bow out of the bet. Now the game is really on…and Zane is embroiled in a wicked matchup he can't resist!

ALL IN by Beth Andrews

Of the Bad Boy Bennett twins, Navy SEAL Xander is always the gentleman. That is, until he's challenged to go against his brother for a date with Quinn Oswald—the girl Xander's wanted since high school! It takes only one kiss for Quinn and Xander's deliciously sexy chemistry to explode. But how much is Xander willing to gamble…before he goes all in? 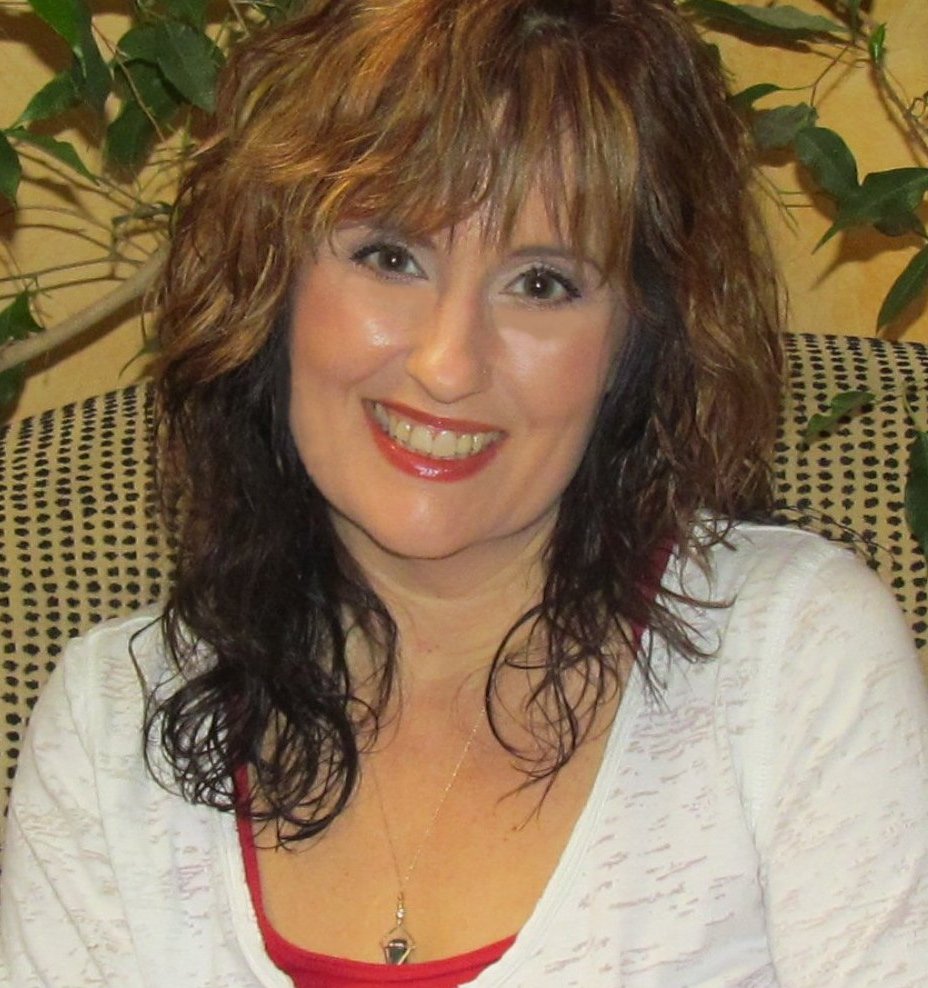 New York Times and USA TODAY Bestselling author of more than forty books, Tawny Weber loves writing about sexy heroes, most notably her popular Navy SEALs series. Her sassy, emotional romances are filled with men dedicated to being the best—and women determined to have the best. Tawny credits her ex-military alpha husband for inspiration in her writing, and in her life. The recipient of numerous writing accolades, including Romantic Times Reviewers Choice and in addition to the NY Times and USA Today bestseller lists, Tawny has also hit the number one spot on Amazon and Barnes & Noble.

A homeschooling mom, Tawny enjoys scrapbooking, gardening and spending time with her family and dogs in her Northern California home.

Vivian wiggled into the most romantic corner booth she could wheedle and ordered a sparkling water.  No point enjoying wine until she knew she’d enjoy the evening, too.

She pulled out her cellphone.  No cancellation message.

Half the time, Vivian felt like her dreams were a tease.  All too often she got within kissing distance of her goal, and poof, there it went.  No big payoff, no awesome climax, nothing.

Because, why?  Because she always blew it.

She shouldn’t have told him her name.

She should have teased instead, said she’d tell him tonight.

Maybe she shouldn’t have let him in on the what she made at The Sweet Spot, either.  Sure, a lot of guys saw that as a turn on, but there were just as many who subscribed to the prude theory.  Like her brother.

And he was Mike’s friend.

Then again, so was Lenny.

Before she’d finished her confused sigh, Zane walked in. And all of her doubts took a backseat to the sight of how gorgeous the man was.  Vivian sat up a little straighter.  Shoulders back, chin high and chest probably jiggling because her heart was beating so fast, she smiled and sent him a little wave.

“Vivian,” he greeted as he joined her.

“Ahh, so the dare worked.”  Vivian laughed.  “How many times did you consider bailing?”

“Bailing?  I’ll have you know I’m trained to confront conflicts of all shape and size.  I fearlessly face down explosives, disarm bombs and disable volatile chemicals. Sometimes all three before breakfast.”

“Tell me more.”  Delighted, Vivian put on a wide eyed look of fascination, even adding a little eyelash flutter for good measure.

“I train with the best.  I’m one of the elite.  There’s no challenge devised that I won’t face.”  He leaned in, his smile almost hypnotic as he teased.  “Baby, I never bail.”

“I can’t tell you how glad I am to hear that,” Vivian declared as the waiter brought Zane a beer and refilled her water.

“But, here’s the thing—” he started to say as soon as the waiter left.

There was only one thing of Zane’s that she wanted to hear about.

“Here’s the thing,” Zane continued, laughing.  “Some guys have rules about buds dating their sisters.  Sisters, cousins, moms.  Guys get weird thinking the women in their lives have sex.  They get even weirder when they know the guy putting the moves on that sex.”

Lips pursed, Vivian propped her elbow on the table, rested her chin on her fist and fluttered her lashes.

“Aren’t you taking a leap there, assuming we’d definitely be having sex?”

Zane blinked, looked horrified for one second, then shook his head.

“I’m speaking generally, not specifically.”  Then he narrowed his eyes.  “Are you saying that you see this thing between us as platonic?”

“Of course not.  I plan on having a great deal of sex with you,” she purred.  “A mind-blowing amount, as a matter of fact.”

“Indeed.”  She reached out with her free hand to trail her fingers over the back of his knee.  Up his thigh, then back down again.  Oh, baby, even through denim, his muscles were rigidly impressive.

He clamped his hand down, locking hers down on his thigh.

“Only one.”  Zane entwined his fingers through hers.  “Your brother.”

“Oh, please,” she objected.  “Like you’re afraid of my brother?  The man wears argyle socks and loafers, for crying out loud.”

Zane’s snicker escaped before he could stop it, then he shook his head.  “Mike’s footwear isn’t the issue. The fact that you’re his little sister is the issue.”

Vivian debated for a handful of approaches.

She could keep blathering about her brother.  That’d put an end to either of their interest in anything after a while.  Mike was like a sedative.

She could offer him an easy out, a simple excuse to end the evening so he wasn’t in danger of violating his bro code.  Given there was a lifelong friendship involved, that’d be the nicest thing to do.

She could seduce Zane into forgetting about the bro code, which would ensure her one night of dreams-come-true-ecstasy.

Or she could do the unthinkable.

Vivian took a deep breath, her eyes locked on Zane’s face.  He had such a sweet smile and sexy eyes.  And there were dreams at stake here, dammit.

So she reached into her bag to do the unthinkable.

“What are you doing?”

She finished dialing her brother’s number.

“Getting you a bro code clearance.”

“Mike,” she said the minute he picked up.  “Let’s play what if. What if I have the hots for one of your friends?  What if this friend wants to make a move but he’s worried about upsetting you, so I want to make the move instead?  What would your feelings be on that?”

“Okey dokey,” she agreed, hanging up and giving Zane her most seductive smile.

Zane gave her a long look, the kind that made her want to squirm in her seat and breathe a little heavier.

“You know he thinks you’re referring to Lenny, don’t you?”

Vivian ran her tongue over her lower lip and leaned into the table. Just enough to highlight her cleavage. She waited until Zane’s gaze returned to her eyes before giving a delicate little shrug.

“Can I help it if my brother is an idiot?” 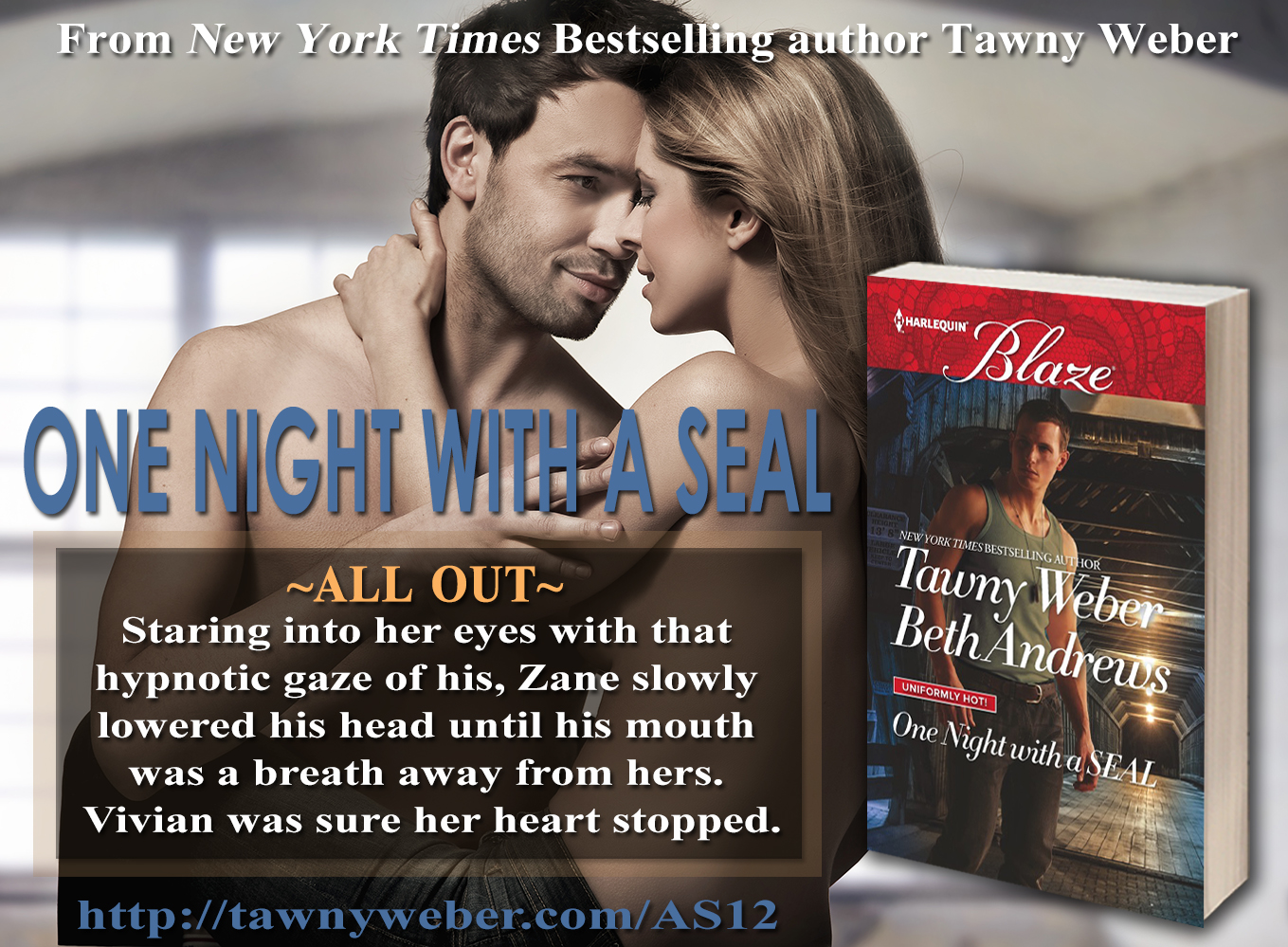 One Night with a Seal: All OutAll in by Tawny Weber
My rating: 4 of 5 stars

This book contains two stories about twin brothers. The 2 authors who wrote them ties the stories together well. I enjoyed them both. These books are part of the Uniformly Hot series out by Harlequin Blaze.

All Out by Tawny Weber:

Zane literally runs in to Vivian. She has always wanted a chance with him. With all that is going on for both of them right now, will she be given a fair chance to fight for her future?

All In by Beth Andrews:

Xander is also home for his 10 year reunion. Like his twin, he has been busy away form home. He wants a chance to win Quinn over. The bet/challenge is a just an extra incentive to win.

I was impressed how these stories meshed so well. The characters were are all strong, yet all very down to earth. I loved that both stories had humor, heat, & heart. So worth it with 2 stories contained inside!

3 Runners Up will receive A Sexy Seal Novella Anthology (ebook)