Even when all his buddies are jumping ship, one sexy SEAL is determined to keep his vow…

Successful event planner Macy Berk plans to make her friend’s Valentine’s week wedding the event of the year. She’s not about to let the bride’s brother mess anything up. Especially since he’s the one who unceremoniously dumped her because of his misguided vow that his commitment to being a Navy SEAL would trump his commitment to any relationships. She has a plan to ensure smooth sailing for the wedding week…

Petty Officer Eli Spencer is determined to keep his distance from everyone in order to avoid voicing the unpopular opinion that this wedding is a huge mistake. When they committed to becoming SEALs, he and his buddies made a vow to one another: being a SEAL would allow no room for distractions like relationships. But now all his buddies are jumping aboard the love boat…

Most women try to avoid the lover who jilted them. But Macy’s plan is simple: seduce Eli until he’s too worn out to ruin anything—but still has enough energy left to admit he was wrong to put his love of duty before his love for her. Until she realizes just how dangerous loving a SEAL could be, for both of them. But being a SEAL means being strong, including strong enough to admit he may have been wrong… 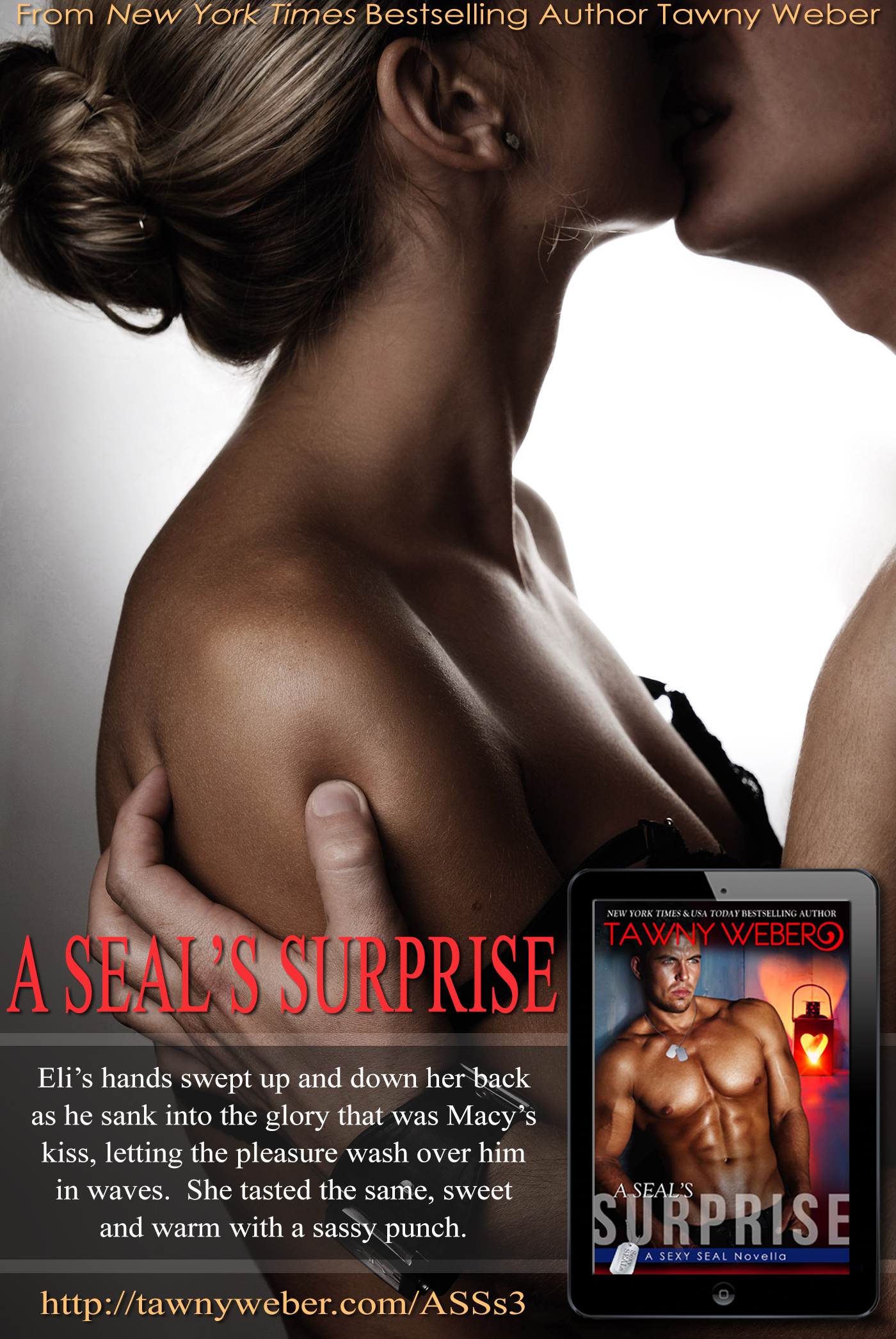 “Why am I against Blaire getting married?” Eli asked.

Macy’s only response was to tilt her head to the side. The wind grabbed all that long, silky hair, sending it flying around her face in a silken dance.

“I’m all for her getting married. It’s my little sister marrying a SEAL that I’m against.”

“You’ve made your feelings very clear.” Her words were as cold as the ocean-tinged air.

“But thankfully, Sam and Blaire didn’t let some stupid prejudice keep them from believing in love.”

“How thankful will Blaire be when she’s stuck home alone for months at a time? How’s that going to go when Sam gets back after a long deployment and can’t tell her a thing about where he’s been or what he’s been doing? How long does a relationship stand that sort of distance?” Swallowing the bitterness coating his throat, Eli stared out at the water. With the sun set, there was no defense against the biting chill, which fit his mood perfectly.

“Yes. I do know. I know that Sam is going to be training in ways he’s never done before. I know there will be demands on his body, on his mind, on his commitment. I know he’s going to face one hell of a lot in the next ten years.” Including death. He didn’t put those words out there, though. He couldn’t. “Now, because he’s marrying her, he’s going to force my sister to face all of that, too. Only she gets to do it blindfolded.”

He didn’t bother looking toward Macy. He knew she didn’t get it. Apparently, nobody did. Eli had spent his life trying to be the hero, but in this situation, he was clearly the bad guy. Wasn’t that enough to be pissed off about?

He heard the rustle behind him and figured Macy was walking away. He sighed, but couldn’t find the energy to shrug. But he damn near jumped out of his boots when he felt her hand on his back.

“I’m sorry,” she murmured when he looked at her. Her eyes brimming with sympathy, she gave him a sweet smile. “I know how much you care about your family.”

“I don’t like seeing people I care about hurting,” he said quietly, wishing he had the right words to make her understand. If he could, she might forgive him for leaving her all those years back.

Suddenly, he wanted that forgiveness almost as much as he wanted her. Need hit him, hard and fast, as she leaned closer to brush her lips over his cheek. She might have meant the gesture to be sweet, he didn’t know. But the way her breasts pressed against his arm made it purely sexy.

“I want you,” he admitted out of the blue, his eyes locked on hers.

He waited for her to laugh in his face. To sneer or deride his desire. He’d deserve it.
Instead, she wet her lips and gave him a long, bone-melting look that sent a shaft of heat spiraling through his body. Then she smiled. A wicked quirk of her lips that warned that things were going to get a whole lot hotter.

A SEAL's Surprise by Tawny Weber
My rating: 4 of 5 stars

This is the 3rd book in the Sexy SEAL series. This book can be read as a standalone novel. For reader enjoyment and understanding of the series, I recommend reading them in order.

Macy knows she will see her ex again. She is planning his sister's wedding event. Thinking about him makes her hot. Seeing him will be worse. Is she ready?

Eli wants to get his buddies to see reason. Getting married goes against everything their younger selves wanted. After seeing the love of his life again will he still feel the same?

This story seemed like so much more than it was. Such fun characters. Seriously HOT story. 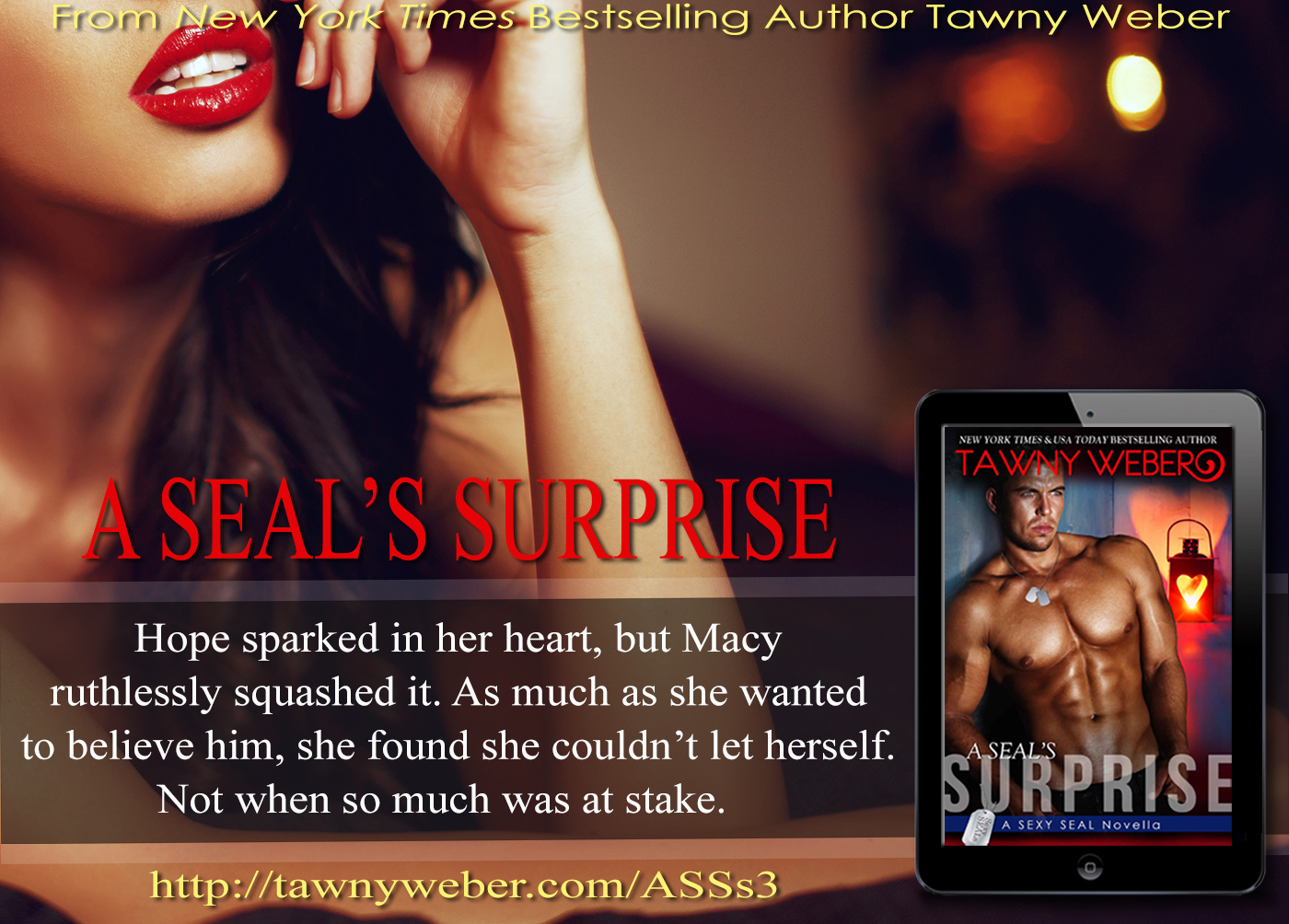