Audiobook Tour w/Review - On a Tuesday

We met on a Tuesday.

Became best friends, then lovers, on a Tuesday.

And everything fell apart on a Tuesday…

Charlotte Taylor has three automatic strikes in my book: 1) She hates me. She also claims that I’m a “domineering jerk with a huge, overbearing ego.” (I do have something huge. It’s not my ego, though.) 2) She takes our mandatory tutoring sessions way too seriously. 3) She’s sexy as hell…And a virgin.

At least, those were her strikes before our study sessions started lasting longer than they were supposed to. Until one innocent kiss became a hundred dirty ones, and until she became the first woman I ever fell hard for.

Our future together after graduation was supposed to be set: Professional football for me. Law school for her.

But she left me at the end of the semester with no explanation, and then she completely disappeared from my life.

We met on a Tuesday.

Became everything, then nothing, on a Tuesday.

And now it’s seven years later, on a Tuesday…

*This is a full length second chance romance, inspired by Adele’s “When We Were Young”

This is a great story about a second chance for Charlotte and Grayson. They met in college and had their life ahead of them. She to be a lawyer, he to be in professional football. When they come across one another later - fireworks!

Grayson had always intended to be with Charlotte. He lost her and did not know where she was. With seven years wasted, he does not want to miss another minute. Convincing her to give him another shot? Priceless.

This book was full of so many precious moments. I loved the banter, sexy times, heat level, pace, etc. I was so pleased I picked this one up. This author is amazing.

The narration in the audio book was very soothing and the voice had just the right inflections and made me actually feel the entire scene. Narrators Erin Mallon, Joseph Discher were a good addition and I enjoyed reading and listening to this book. 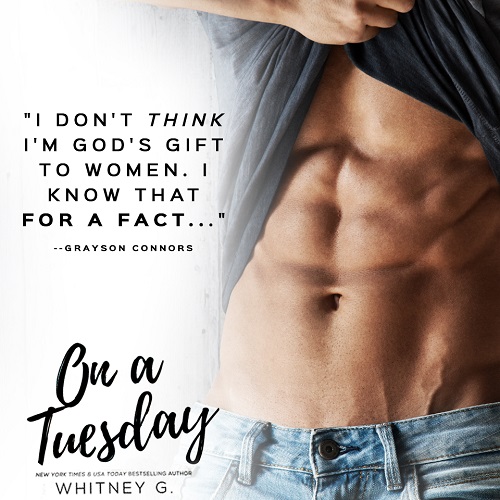 Whitney G. is a twenty-eight-year-old optimist who is obsessed with travel, tea, and great coffee. She’s also a New York Times & USA Today bestselling author of several contemporary novels, and the cofounder of The Indie Tea–an inspirational blog for indie romance authors. When she’s not chatting with readers on her Facebook Page, you can find her on her website at http://www.whitneygbooks.com or on instagram: @whitneyg.author. (If she’s not in either of those places, she’s probably locked away working on another crazy story.) Don’t forget to sign up for Whitney’s monthly newsletter here: http://bit.ly/1p9fEYF