Once is not enough 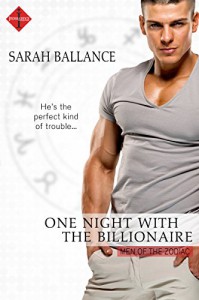 This is book # 9, in the Men of the Zodiac series.  It can be read as a standalone as books are not interconnected on anything other than they mention the astrological sign inside them.  I just recommend reading the series as a whole, since they are all good book of HOT men and strong women.

Zoe Davenport is running away from a scandal that her ex-fiance has created.  She asks an old friend to help her out and he tells her a mutual old friend can help her get away for a while.  Little does she know until she arrives on the island that the mutual old friend is her former neighbor and hottie boy next door, Ryder Nash.

Ryder had no idea who he was helping, just was willing to do the favor.  When she arrives they both have a bit of a shock.  Unknown to either of them, they were attracted to each other back in the day - but neither acted upon it.

It has been 10 years now, and their lives have moved on.  Well, sort of.  She is still hot for him and he is extremely attracted to her.  Now if only the past and a certain bunch of paperwork could get out of the way...

Zoe is not sure how to feel except excited and hot under the collar at the thought of being with Ryder.  He is sure sending her mixed messages.  What is a girl to think?  One minute he is all over her with kisses that nearly scorch her.  The next - running away and telling her he can't.

Ryder has never wanted anyone or anything the way he wants Zoe.  Now it is just a matter of how much he wants her.  Is it worth more then his net worth?  He has a lot to lose if he gives in to his desires.

I found this book completely compelling.  I was hooked at page one, and could NOT put it down.  There are surprises in store for the reader!  It is full of sexy times, banter and just plain good romance.  I give this story a perfect score of 5/5 Kitty's Paws UP!


***This ARC was given by Netgalley.com and its publisher for review purposes only.