Blog Tour - THE CHANGE UP

Readers looking for something a little different will love The Change Up by Elley Arden, a twist on the traditional billionaire romance.

Out now! The Change Up (Arlington Aces #1) by Elley Arden 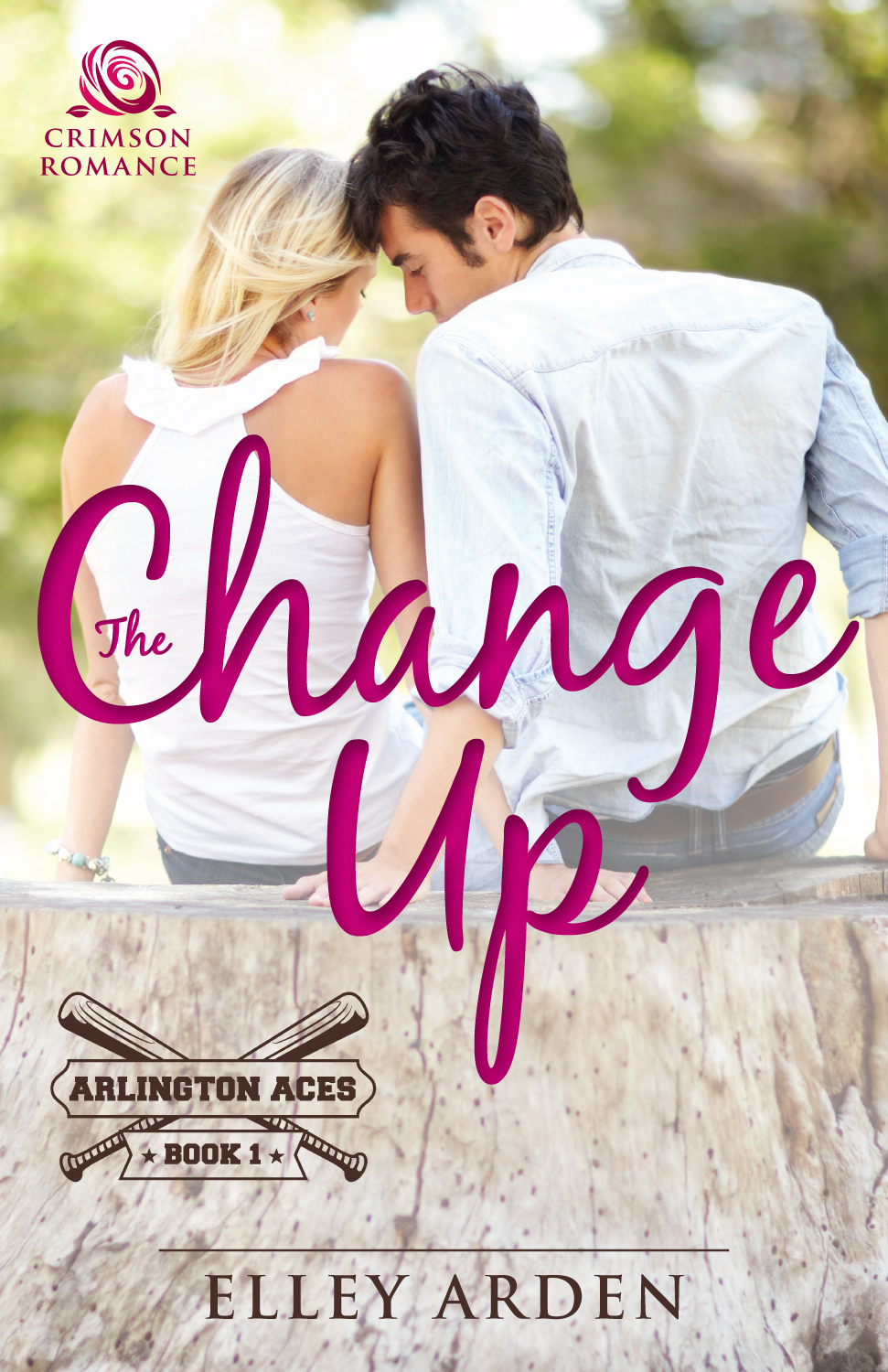 Title: The Change Up

Commercial real estate mogul Rachel Reed is the one person her father can depend on, so when he walks into her Philadelphia office two weeks shy of her fortieth birthday to drop a personal and professional bomb, she rises to the occasion. She will help get his independent professional baseball team up and running before the inaugural season, and then … she will sell the team to recoup his substantial investment. It’s a tall order, but Rachel knows one thing for sure: a sexy nuisance from her past and a few acres of trees won’t stand in her way.

Former minor-leaguer-turned-landscaper Sam Sutter is surprised to find his brother’s ex in the woods behind the house he bought when he cashed out his signing bonus and said so long to baseball. He’s even more surprised to learn “his” trees are on her chopping block. There’s no way he’ll desecrate his nature-loving mother’s memory by letting that happen. But butting heads with the beautiful business woman is a tricky task that leads Sam to accept a position as head groundskeeper at her father’s stadium. Working under Rachel’s watchful, smoldering eyes might be Sam’s undoing.

She doesn’t know a thing about baseball. He swore off the sport ten years ago. But strange things happen when field dust gets in your veins.

She thought about that for a minute, thought about him, standing there, looking at her like she was the only woman in the world, and the heat was undeniable. The attraction unmistakable. Sam Sutter was a mouth-wateringly beautiful man. Five years younger and without a discernible life plan, but damn it, libidos didn’t care about those things. And honestly, the only thing holding her back from taking out all her recent frustrations on his blessed body right now was the fact his crew was just outside the leftfield wall.

To neutralize the lust bubbling in her veins, she asked, “Do you miss baseball?”

He looked broadsided by the random question and didn’t rush to answer.

“I know that came out of left field …” she grinned at her cleverness, “but I’ve been wondering about it ever since the festival. When my dad was asking you about baseball, you looked very uncomfortable.”

His gaze shifted away from her and anchored onto something in the grandstand, but then he shrugged like she hadn’t hit a nerve. “I was uncomfortable because I was worried about your father. I wasn’t sure what was going on. That’s all.” But his jaw pulsed, and she knew better.

“Sam …” She stepped closer, narrowing the space between them. “I saw that same look a minute ago when I asked you to help me out with the coaching prospects. You miss baseball. It’s okay to admit it. If you didn’t, you wouldn’t be human. God, you played every year of your life until you were how old? Just because you were ready to hang it up professionally doesn’t mean you don’t miss the game personally.” He looked at her then with a hurt in his eyes that seemed to be saying maybe he wasn’t as ready to hang it up as he pretended to be.

“I miss some things more than others,” he said. “There’s a rush you get from playing the game.” Silence stretched out between them as the warm wind wrapped them in the sun-dried fragrances of spring. All the while, his eyes roamed her face until they focused on her lips. “Fortunately you can get that rush from other things.”

“Like?” she asked, breathlessly, knowing damned well she was encouraging him.

“This,” he whispered before he leaned in and kissed her, a brush of his lips, soft as the breeze that carried the heated scent of his skin to her nose and then to her brain. Elley Arden is a born and bred Pennsylvanian who has lived as far west as Utah and as far north as Wisconsin. She drinks wine like it’s water (a slight exaggeration), prefers a night at the ballpark to a night on the town, and believes almond English toffee is the key to happiness.

Elley has been reading romance novels since she was a sixteen-year-old babysitter, sneaking Judith McNaught and Danielle Steele novels off the bookshelves of the women who employed her. To say she’d been sheltered up to that point is an understatement. No one had ever told her women could live bold, love freely, and have sex lives that were exciting and fulfilling. (They don’t teach these things in Catholic school!) Now that she knows, she’s happy to spread the word. The women she writes about may be fictional, but the success, respect, and love they find on the page is a universal right for women everywhere.

You can also visit her online at the following places:

I had big plans for my reading goals this year (a book a week), but by February, I had modified those goals to a couple books a month. I’m embarrassed to say I haven’t even done that consistently. I let life get in the way. Now, I’m back to making reading a priority, and reading on my iPhone has helped me with that. I always have my phone with me, so I always have books with me. It’s amazing how much I can get read while waiting to pick up my daughter from school or dance. What am I into now? Well, I discovered Lori Wilde’s Stardust, Texas series (baseball themed), and I’m making my way through that. I’ve also started Jennifer Bernard’s Love Between the Bases (Kilby Catfish) series. I have a bunch of other random books spread over my Kindle, iBooks, and Nook apps—everything from historical romances to some romantic suspense. I’m really trying to widen my horizons where my reading is concerned.

The idea of widening my horizons led me to sign up for the Book of the Month Club. Have you heard of it? Each month, there’s a selection of five books that are chosen by guest judges. Club members can choose which book they want to receive in the mail. One of the things I love about this is that the books are hardcovers. I hadn’t held a hardcover fiction book in many, many years. The rush I got when I finally cracked open the first book is incomparable. Whoever said print books are dead hasn’t opened a hardback book recently. I swear angels sang. Here’s the rub, though. It’s hard to carry—and remember to carry—a hardback book everywhere I go, so more often than not, it’s at home, miserably unread. I am very behind on my books of the month right now. (I’m currently reading The Nest by Cynthia D’Aprix Sweeney, and it’s very good!) Aside from the rush of having a hardback book to read again, I love that the Book of the Month Club has me reading outside my chosen genre (romance). It’s easy to get into a reading rut, and it’s so thrilling to discover something new.

Going forward, I need to be more methodical and organized about reading. (I wish I had a spreadsheet to keep track of everything. I love spreadsheets, but I don’t know the first thing about making one. If you know of one, please leave me a comment with the information.) A little more organization will keep me on track with reading when the deadlines start piling up. Right now, I’m staring down a deadline for the next book in the Arlington Aces series, THE SWEET SPOT, which will end with Rachel’s sister Helen Anne and outfielder Giovanni living happily ever after. On the heels of that deadline, I have one for the Arlington Aces holiday novella, THE SQUEEZE PLAY, in which Liv will finally get her happy ending. Then, I’ll be writing the last book in the Aces series, THE FULL COUNT. In the midst of all that chaos, I’m trying to put together a hockey romance series. So you can see how finding time to leisurely relax with a book is almost impossible. But where there’s a will, there’s a way, right? Thank God for the ability to read on a smart phone.

Do you read on your phone? It takes some getting used to for sure, but if you can get past the smaller text, you’ll never be without a book again.

Thanks, Kitty for having me, and happy reading, everyone!

Follow the tour and enter to #win a grand prize of $25.00 Amazon gift card and a signed bundle of the Kemmons Brothers series!

It's All About the Romance

Life of a Female Bibliophile

What Is That Book About

HEA Romances With a Little Kick

One Girl Lost in Romance