Summer Reading Celebration - Robin Bielman & Lovestruck
Entangled Lovestruck is so excited to be continuing the summer reading celebration with Robin Bielman, a binge-worthy author of both sweet and sexy reads! We are giddy with anticipation over her upcoming release, The Best Friend Bargain, and we hope you are, too!

About the Book:
A temporary agreement neither could keep…
Surfer Zane Hollander has always been lucky with the ladies. But if he’s to land a new sponsor, Zane needs to clean up his act, and fast. He might not have anything in common with brainy event planner Sophie Birch, but she’s sweet and respectable—exactly what he needs.
Sophie’s never set foot on a beach, let alone left her hometown…until now. What does a sex-on-a-surfboard celebrity like Zane see in a klutzy bookworm like her? Oh, right. Nothing. Their relationship is purely fictional. And Zane is supposed to be on his best behavior. Sigh.
But the more Sophie blossoms under the beachy sun, the more Zane fears he’ll just break her heart. And this time, he’s found a heart he isn’t willing to break…
Find it online:
Amazon | B&N | iTunes | Goodreads
Blame It On the Kiss by Robin Bielman

About the Book:
The one guy she shouldn’t want…
Honor Mitchell has never finished anything she’s started, but she’s determined to finish her best friend’s bucket list before it’s too late. No way will she let a man compromise her mission—especially not her best friend’s ex, who is just as determined to help tick items off Honor’s list.
Bryce Bishop is done being Mr. Nice Guy. His trust in women is shot, but after kissing Honor—a kiss that ended as soon as they realized the other’s identity—he needs some closure. He’ll help Honor, then move on with his life. End of story.
He and Honor are completely wrong for each other, but with each task they cross off the list, wrong starts to feel right. But Bryce is in a no-win situation, because suddenly being the do-good guy has put his plans—and heart—in serious jeopardy.

Blame it on the Kiss by Robin Bielman
My rating: 4 of 5 stars

This is the 2nd book from the Kisses In The Sand series. This book can be read as a standalone novel. For reader enjoyment and understanding, I recommend reading series books in order.

Bryce just wants Honor to give him a chance. Just a moment in time that he can be more than just a past piece for her best friend. They both have pasts with hurt and pain to overcome. Can they get past the secrets and get together?

I love this series. I found these two very honest and sincere. I loved their banter and the heat is sparking right off the page!


***This ARC copy was given by Netgalley and its publishers, in exchange for an honest review only.

Yours at Midnight by Robin Bielman

About the Book:
One night. One love. One secret that could rip them apart…
Lyric Whetsone only had eyes for Quinn Sobel’s brother Oliver, until a car crash took Oliver’s life on New Year’s Eve. Then, a moment of shared grief between Quinn and Lyric became something more impassioned, something that frightened Quinn so much he ran from Lyric’s bed and her life, disappearing for four long years.
Now Quinn’s back for another New Year’s Eve, struggling for closure, desperate to leave his grief in the past and make amends with the girl of his dreams.
But Lyric has a secret–one that could drive Quinn from her life forever. Will Quinn run away from the love and acceptance he’s always wanted…or will he claim his New Year’s kiss and make her his at midnight?
Find it online:
Amazon | B&N | iTunes | Goodreads 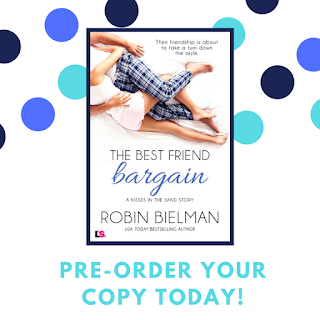 The tail end of daylight cast a glow around her in one-of-a-kind beauty and he found himself tucking her hair behind her ear as she looked up at him with similar appreciation.

When her gaze moved to his mouth, he was a goner.

He ignored the voice inside his head reminding him she was his best friend and once they crossed this line they could never go back, and gave her two seconds to say something to change his mind.

She took a step back.

One kiss. One kiss to get it out of his head and put it to rest. She might have placed another foot between them, but Danny saw the indecision in her eyes. He inched closer anyway, unwilling to let her go without one more try. It was a jerk move, but if he didn’t get to taste her he’d go insane wondering.

He cradled her neck in his hands.

“Danny.” He liked how breathless his name sounded on her lips.

She half gasped, half sighed, a pleasure-and-pain kind of sound he wanted to turn into one of satisfaction. They had to get this crazy new attraction out of the way so they could go back to being just Liv and Danny. “Make it terrible,” she whispered.

“To make it awful,” she reiterated.

“Prepare yourself for the worst kiss ever.”

Her small smile made itself at home inside his chest. He lowered his mouth to hers. No tongue, he told himself. Keep it innocent. Safe.

The Best Friend Bargain by Robin Bielman
My rating: 5 of 5 stars

This is the 3rd book in the Kisses In The Sand series. This book can be read as a standalone novel. To avoid spoilers and enjoy, please read the series in order.

Olivia & Danny have been best friends since way back. They both avoid getting messy by crossing over that line. Now she needs him more than ever.

Danny knows his future is bleak. He wants to spend it alone, as to not hurt anyone else. Unfortunately, those around him who care, wants him to be more present in his and their lives. Can he get past the issues and move on with the girl?

I am truly moved by sincere friendship. I loved this story for many reasons. This is a great series. The characters were just complex enough to be interesting. The sexy times were hot enough to bounce sparks over the room.


***This ARC copy was given by Netgalley & its publishers, in exchange for an honest review.

View all my reviews
Enter the giveaway!
a Rafflecopter giveaway
About the Author:

When not attached to her laptop, USA Today Bestselling Author Robin Bielman can almost always be found with her nose in a book. A California girl, the beach is her favorite place for fun and inspiration. Her fondness for swoon-worthy heroes who flirt and stumble upon the girl they can’t live without jumpstarts all of her story ideas.
She loves to go on adventures, and has skydived, scuba dived, parasailed, gotten lost in the wilderness (and only suffered a gazillion bug bites for it) hiked to waterfalls, and swam with dolphins. In her spare time she also likes to put her treadmill to good use while watching her favorite TV shows, take hikes with her hubby, indulge her sweet tooth, and play sock tug of war with her cute, but sometimes naughty dog, Harry.
She dreams of traveling to faraway places and loves to connect with readers. Keep in touch and sign up for her newsletter on her website at http://robinbielman.com.
Website | Twitter | Facebook | Instagram | Goodreads
romance series Contemporary chick lit review new adult Blog Tour entangled summer Robin Bielman excerpt 99 cents Yours at Midnight Lovestruck Robin blame it on the kiss bielman the best friend bargain summer reading celebration keeping mr right now