This sassy, spirited baker is fine with heat—
but is her fake fiancé too hot to handle? 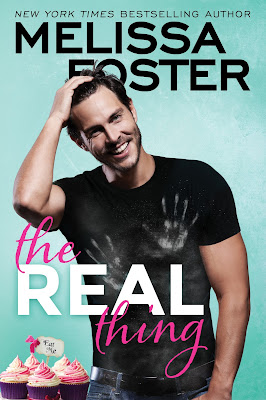 Bakery owner Willow Dalton’s friendship with Zane Walker has always been a bit complicated. Now a scrumptiously hot A-list actor, Zane’s always had a reputation as player. He’s arrogant, and he’s definitely not boyfriend material. Sure, he did Willow a favor by agreeing to take her virginity before college, but is that reason enough to go along with a fake engagement a decade later—even if it comes with a real diamond ring?
Zane should have known better. Nothing involving Willow has ever been easy. Still, he knows her better than anyone, and becoming America’s hottest new leading man means cleaning up his reputation. An “engagement” to curvy, sass-mouthed Willow is the perfect PR move . . . provided no one gets hurt.
Now Zane and Willow’s little white lie has turned into an irresistible recipe for sweet temptation. And soon no one will be able to tell the difference between their fake engagement or the real thing—including them.
**THE REAL THING is being published by Montlake (an Amazon imprint) and won’t be available on other ebook retailers, but you can download a FREE ereader app to read it HERE, order the paperback.

“You're sleeping on the couch,” Willow said for the fifth time in as many minutes as she and Zane left their suite. He was busy texting, and she wasn’t sure he was even listening anymore. He used to be such a great listener. When they were younger, he’d never acted like he was above her, despite the fact that he was the star quarterback, lead pitcher, and eventually the prom king, and she was two years behind and as awkward as a foal on new legs.

“Are you listening to me?” she asked as they walked down the hall.

“Yes. I just got confirmation. You’re catering breakfasts for the set. Cool?”

“Yes, perfect. But did you hear what I said?”

She had almost backed out of their deal twice since she’d accepted. First when she’d seen the king-size bed, which really drove home their situation, and again when Zane had whipped off his shirt to change and her sex-starved body had buzzed to life. She was still a little nervous about the whole thing, mostly due to that second issue, but she felt a certain obligation to help him. Regardless of how arrogant he was, she’d never forget how tender he’d been with her when she’d given her almost-eighteen-year-old self over to him, and he was a true friend, even if they had a weird friendship. The truth was, even if he hadn’t done her that favor before college, she would have agreed to his plan. She liked him despite his insatiable appetite for women. He was everything she loved in a person and more. He was confident and funny, direct and thoughtful, and honest when it counted. Painfully honest. The exposure for Sweetie Pie Bakery was just the icing on the fake-fiancée cake. What a difference national exposure could make.

Zane shoved his phone in his pocket. “Yes. Sleeping on the couch. Got it. But you can’t blame a guy for trying.”

She laid her best damn-right-I-can stare on him and pushed the button for the elevator.

“You mean that five minutes twice a year?” Willow remembered how happy he’d been when he’d finally left town to pursue his dream of being an actor. He’d been bursting at the seams for a bigger life. But her “five minutes” comment wasn’t really fair. He never missed Ben’s birthday, and he almost always made it back for a few days over the holidays, even though his parents had moved to Florida right after he’d graduated from high school and left town. He’d been back a few other times when he was filming nearby. Even though she rarely saw him, their texts—and the fact that he was her first real love, even if he didn’t know it—had kept him in the forefront of her mind. Unfortunately, it also kept her heartbreak pretty close to the surface, no matter how deep she tried to bury it.

The Real Thing by Melissa Foster
My rating: 5 of 5 stars

Willow & Zane are the best of friends. He just has no idea how she feels about him. They have some seriously hot history. Now he needs her to help him out.

Zane tricks Willow into being a part of a charade. Be fake-engaged to me? Sure, like it is hard to pretend to be crazy about a guy she is head over heels for.

This is such an achingly sweet story with a real sexy twist. I absolutely loved it! I feel like this is the author's best work so far. I am excited to read more from the new Sugar Lake series.


***This early copy was given in exchange for an honest review, by Netgalley and its publisher.

PRE-ORDER THE NEXT SUGAR LAKE ROMANCE
ONLY FOR YOU
Releasing December 5th, 2017 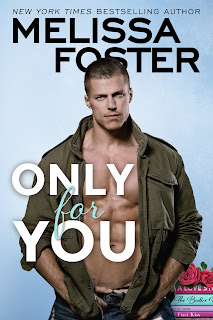