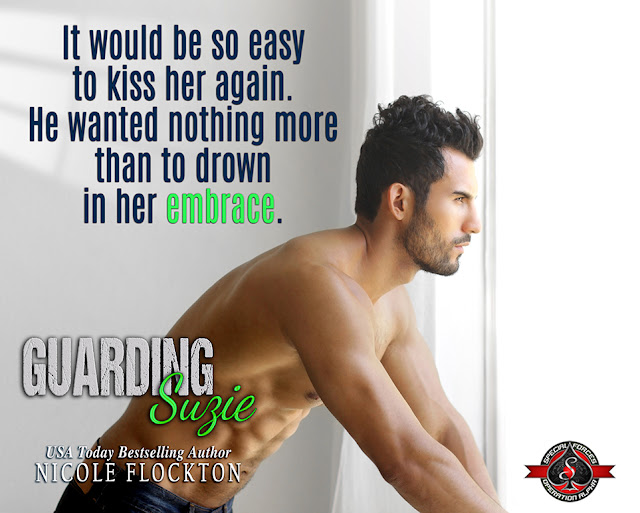 Guarding Suzie Excerpt © Nicole Flockton 2018
A red-hot, searing pain pierced Ryan ‘Joker’ Smith’s leg.
“Fuck.” His left leg buckled beneath him. Before he could face plant into the mud an arm banded around his waist and pulled him upright.
“I got you, man. Can you walk?” yelled Greg ‘Cowboy’ Robertson, both of them ducking as another round of shots were fired in their direction.
Ryan gripped his left thigh. “Yeah.” Even if he couldn’t there was no way he’d let his teammate know.
Cowboy nodded. “We’ll get to cover and then we can check out your injury.”
Gritting his teeth Ryan shifted most of his weight to his right leg and, with Cowboy’s help, they made their way to a grove trees.
“Sitrep.” Robot’s voice came over the coms.
“Joker’s hit,” Cowboy responded to their leader. “We’re heading to the trees ten clicks west from our last check in. Will give update when we can.’
“Roger, that.’
A few seconds later they were covered by trees and Ryan collapsed on the ground. “Shit, this burns like a fucker.”
Cowboy slapped his pack down on the ground next to him and pulled out his first aid kit. “This is gonna burn even more.”
Ryan knew what exactly was going to happen next. “Tell me something I don’t already know. Where are the other guys?”
“Who the fuck knows. Now get ready.”
Cowboy ripped the QuikClot pack and poured the contents over his bullet wound. Ryan bit back a groan at the sting of the powder. He breathed through it, when what he really wanted to do was curse up a blue streak. He knew the QuikClot was only a temporary measure, but it would be enough to get him through until they were able to get safely out of the hellhole they were in.
He closed his eyes and rested his back against the tree trunk, waiting until the burn died down to a more manageable pain level.
“You okay?”
He grunted in response to Cowboy’s question. He knew the bullet hadn’t gone through. It was still lodged in his thigh which meant he had surgery in his future. Thinking about surgery reminded him of the night he’d spent with the hot nurse he’d met when the team had taken his teammate, Italy’s, woman, Erin, to hospital after her kidnapping. Behind his closed eyes, a vision slammed his brain, the hot nurse, her hair spread across the pillow, her mouth open groaning out her release, as they climaxed together.
It had been one night three months ago. They’d agreed on the one night. No numbers had been exchanged, but sometimes he thought about her. More than he’d thought about any of his other hook-ups. Ryan refused to acknowledge that he hadn’t even thought about sleeping with another woman since that night. 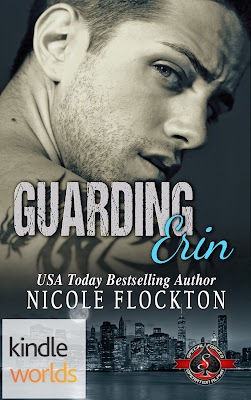 a Rafflecopter giveaway
Hosted By: