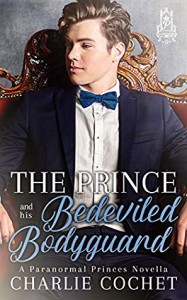 Prince Owin has come to take his turn in the search to solve his quest.  The King will send him on his way with minimal resources and he must solve the quest to get the prize.  Along the way, he only has his bodyguard as company.

Grimm is the most alpha of the alpha's, since he too is of royal blood.  Having been assigned to the Prince, he finds it hard to take that he does not appreciate the canine creatures with which he has been surrounded.

Together, these characters go on a short but simple journey.  There is some magical surprises and more creatures to be found.  The characters are both fun and playful in their own ways.  Such a sweet and yet sexy read.  I give this a 3/5 Kitty's Paws UP!