Book Blitz - The Other Magic

Darkness stirs in a world that is ill-equipped to confront it.

A prophesied king is born, but not all will benefit from his foretold conquests.In a realm where only clerics are permitted to practice magic, Kibure, a mere slave, draws the attention of much more than just his master after wielding an unknown force in a moment of desperation. In a twist of fate, Sindri, the priestess hired to strip Kibure of his power, defies the law, revealing designs of her own. But trust is in short supply in a land ripe with deceit. This wayward pair will have to work together if they hope to evade capture at the hands of the Empire’s most potent wielders.

Halfway around the known world, Prince Aynward’s knack for discovering trouble drives him deep into conspiracies within which he does not belong. Too arrogant to accept counsel, he will have to learn the hard way that some actions have consequences that cannot be undone…

The Other Magic by Derrick Smythe

Purchase Your Copy Today for Just $0.99!

THE OTHER MAGIC
A Passage to Dawn Novel

Another blast of energy split the air. Grobennar used his own powers to deflect the blow, but the sheer volume of energy was too great and he was still thrown back into the wall.

He landed with a thud, then groaned.

“You are my servant!” Magog’s voice became a growl. “I am not yours to command. You have forgotten your place.”

Never before had Magog lashed out like this. His powers were as of yet still manifesting, still growing, but already he commanded strength unknown to any mortal man. Magog could easily kill him if he wished, and Grobennar now feared that in his anger, he just might. He forgot the physical pain of the attack on his body, and the great blow to his ego.

The voice in Grobennar’s mind interrupted his already strained thoughts. “You’re not alone with the God-king. I sense the life-essence of another; a wielder.”

Grobennar collected himself and rose, forgetting the danger posed by the unpredictably obstinate God-king. It was still Grobennar’s duty to serve and protect. Perhaps the God-king was right about the coming of the Dark Lord’s agent. Grobennar drew in Klerós’s power. Then he spotted movement to his right. He summoned more, ready to strike—

“What are—how dare you!” Magog yelled.

Grobennar ignored the oblivious Emperor as a form materialized from the shadows cast by ceiling-high drapes in the corner of the room. Grobennar shouted, “Get down!”

Grobennar extended a hand, readying to strike. Just before he released a bolt of searing energy, the shadowy shape stepped into the light and spoke. Grobennar recognized the voice with revulsion, relaxing his magic with reluctance.

Mazi Rajuban. A member of the High Council and long-standing opponent of both Grobennar and his more conservative faction within the Council. “Peace, brother. I was asked by the God-king to be in attendance for today’s meeting.”

Jaween spoke into Grobennar’s mind, “Have I mentioned that I do not care for this man?”

Nor do I, thought Grobennar wryly to himself.

The God-king bellowed, “The High Council is fickle, paralytic, and incapable of action!” Lowering his voice, he added, “You are right about assembling the Council. But it will not be to initiate discourse. You will inform them.” He raised his voice once more. “You will inform them that the time has at long last come to begin preparations for the Purge. The enemy stirs! We too must shed our idle position.”

Grobennar knew better than to disagree. He had somehow lost favor with the God-king, and Rajuban’s attendance here served as an answer to the question of how.

Rajuban smiled. “You are wise to see the wisdom of the God-king’s words. He has been tightly leashed for far too long. The time has come for him to realize his true destiny as avatar to Klerós, praise be his name.”

“Oh he’s good. I can’t help but hate him, but his politics are praiseworthy. Perhaps we might torture and kill him later?”

Grobennar ignored Jaween, instead looking to Magog, nodding. The decision had been made. Rajuban had defeated him in this bout.

“Of course. This is well. Klerós guide the both of you.”

That snake had maneuvered behind his back to gain the ear of the God-king. He would need to tread very carefully.

Grobennar bade the God-king farewell, refusing to acknowledge Rajuban, then stalked out of the room as quickly as possible. He considered his next course of action, though there wasn’t much to consider. He had no choice but to call a full assembly as instructed.

Grobennar entered his own chambers and melted into the chair beside his bed, mentally exhausted.

“So. This purge. That means war, right? I will be able to persuade our enemies?”

Grobennar picked up a quill and ink from the small table to his left to begin writing out a list of preparations. “Yes, the Purge means war. I suspect you’ll have plenty of chances to persuade, you might even see some killing.”

“Ooh-ooh-ooh. Yes, persuading and killing! I know your mood is a touch soured from earlier, but this really does call for celebration. A small feast, perhaps? That might lighten your mood, as well.”

“Did you write that down?”

“Are you ignoring me again? You know it hurts my feelings when you ignore me.”

Grobennar reached up and removed the pendant from his neck and tossed it onto his bed a few paces away, limiting the strength of the spirit’s connection to him. “I need to think,” he said through clenched teeth.

He wondered if perhaps secreting the forbidden spirit from the debris all those years ago had resulted in more trouble than it was worth. He heard a sound in his head that was disturbingly not like weeping, yet he knew from his time with Jaween that this was precisely what the spirit was intending to communicate.

He sighed. “I’m not ignoring you, Jaween. You can stop the crying. I just need it quiet in order to think.”

Jaween’s mood elevated. “So that sounded like real crying this time, didn’t it?”

Grobennar rolled his eyes. “Closer than ever before.”

It was going to be a very long day. 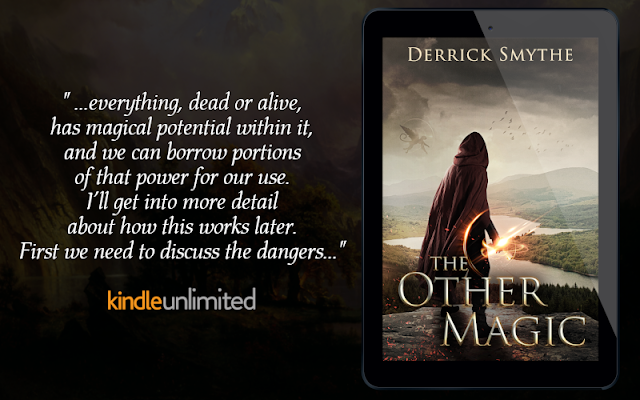 To celebrate the release of THE OTHER MAGIC by Derrick Smythe, we're giving away signed paper copies to three lucky winners!

GIVEAWAY TERMS & CONDITIONS:  Open to US shipping addresses only. Three winners will each receive a signed paperback copy of The Other Magic. This giveaway is administered by Pure Textuality PR on behalf of Derrick Smythe. Giveaway ends 12/31/2019 @ 11:59pm EST.  CLICK HERE TO ENTER THE GIVEAWAY!

DERRICK SMYTHE resides near his hometown in Upstate New York with his wife, two daughters, and their dog, Magnus. When he is not working on his next novel, he enjoys finding any and all reasons to be outdoors. Listening to audiobooks while seated upon the throne of his riding lawn mower is a favorite and when the snow falls, Derrick eagerly transitions to snow-blowing his driveway with the same dual-purpose in mind.

Derrick's debut novel, The Other Magic, is the first installment of his Passage to Dawn series, an epic fantasy set in the World of Doréa.

This promotion was brought to you by Pure Textuality PR. 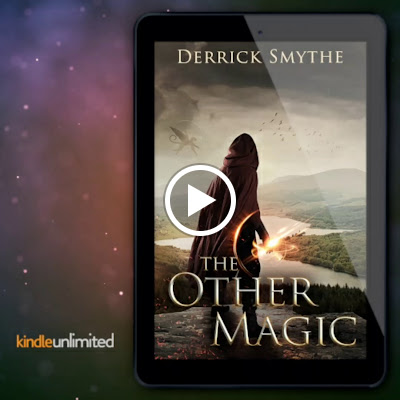