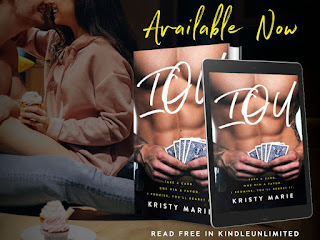 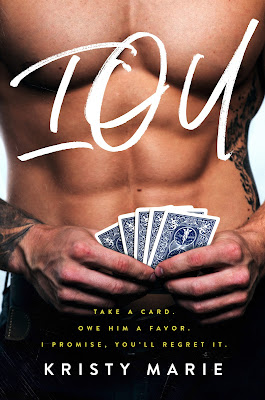 Purchase Here--> smarturl.it/jys4js
Take a card.
Owe him a favor.
I promise, you'll regret it.
IOU, a sexy, new adult standalone from Kristy Marie is out now!
Add IOU to your tbr. → https://www.goodreads.com/book/show/49198704-i-o-u
Blurb:
It’s official.
I, Ainsley James, am crazy.
Desperate and crazy.
It’s the only explanation as to why I’m nauseous, standing outside Maverick Lexington’s door.
I mean, it’s possible the stories about his deck of playing cards—with the words IOU scrawled across the back—are just rumors of the ruthless quid pro quo deals he barters.
But the flutters in my stomach know better.
Maverick is as cold as they come.
But, I need one of those cards.
I NEED to owe Maverick Lexington a favor…
Whatever the terms, I’m willing to pay.
Because, at this point, I have nothing left to lose.
EXCERPT:
I step back just as the door swings open with force, and a rock hard body fills up the empty space. My gaze starts at the top, noting the firm grip he has on the molding. The muscles strain against his taut skin, flexing as he leans forward, cocking his head to the side. His face—

This is bad—really, really bad.

His scowl curves up into a lazy grin.

“Waitress,” he purrs. His voice has this melody of a luring song— one meant to pull you in and destroy your heart in a matter of seconds.

It doesn’t affect me, though.

“Dick at table forty-three, the princess who needed his steak warmed.”

Slap me with a stupid sticker because I have lost my damn mind. Why in the hell did I just say that? Yes, he was the rude-ass who insisted I warm up his food, and yes, he’s the one I dumped said food on, but that was yesterday, and I have moved on. Hopefully, so has he.

“Dick, huh?” He drops one of his massive arms and rubs a spot just above—ah damn, his nipple is pierced. Not to mention the whole right side of his ribs are covered in a massive tribal tattoo. Even on his left, a smaller tattoo wraps from his back and ends on his stomach, teasing me to gaze longingly at the ridiculous set of six-pack abs between them.

Why is life not fair?

I drag in a deep breath and try to let any animosity of yesterday go. “Can we start over?”

That lazy grin of his falls in an instant. “No.”

Sighing, I watch as his body goes rigid, and his arm goes back to the top of the door frame, blocking any view behind him. His icy blue eyes stare back at me unyielding and hard, not the same guy that grinned when he first saw me. “I’m sorry about last night.” Hopefully, my sincerity will soften him.

Okay, so we’re going with a hard no on being softened.

With no hint of emotion, other than the apparent tone of boredom, one can surmise that Maverick will not be bought with sweetness and apologies. I’m going with plan B, which I’m making up as I go.

“Are you Maverick?” I could have said that a little stronger and without the slight tremor.

He drops his hands and reaches into his back pocket, producing a handful of playing cards. Oh no. I’m not prepared for it to get real this fast. What if those two idiots in class were right? What if I’m never the same after this?

“How much is it worth to you?” He drawls, producing a marker.

IOU by Kristy Marie
My rating: 4 of 5 stars

Ainsley has had a tramatic experience. With it she meets the local Fire Department Captain, and the local College Mafia. In her grief she is learning people can surprise you.

Maverick is used to having people fear him. One woman is ripping all of his careful and staged world apart. All because he cannot resist helping her.

This book was the true meaning of a slow burn. While I was not sure whether I liked the premise, I kept reading since the banter was witty and sharp. I fell in love with the characters before they even met. Now this author is one of my fave's and being added to my 1-click list.

A self-proclaimed reader enthusiast, Kristy started her writing journey back in 2009, reading and writing when her daughter was napping. Establishing her place in Corporate America (because something had to pay the bills), writing became her dirty, late-night secret.

After eight long years, she released her debut novel, Commander in Briefs. It was a long road, but she can honestly say, the road less traveled had the most beautiful sights.
The only thing Kristy Marie loves as much as reading and writing is sports! Especially those that require muscles and a nice ass. Her favorite is, and always will be, baseball. She's such a fan, that she even married her small town's high school's centerfielder where they still live with their three badass kids.
Website ~ Facebook Author Page ~ Twitter ~ Instagram
romance Contemporary review new release new adult arc college Blog Tour excerpt BookReview NA student IOU Atlanta KU review tour marie wordsmithpublicity kristymarie kristy kristy marie krsity marie books