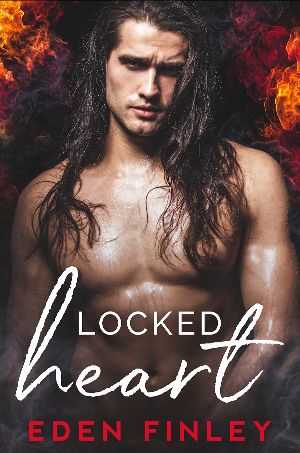 Ten years ago, I left my heart with a boy when I moved to LA to become a rock star.

We made a pact. If I ever performed at Death Valley Music Festival, he’d come see me play.

Now, after a decade of paying my dues, I’ve been booked as a headliner.

Only question is, will he show up or do I need to face the possibility of letting him go forever?


**Locked Heart is a 27,000-word MM novella that is loosely connected to the Famous series but is a complete standalone.

ADD TO YOUR TBR 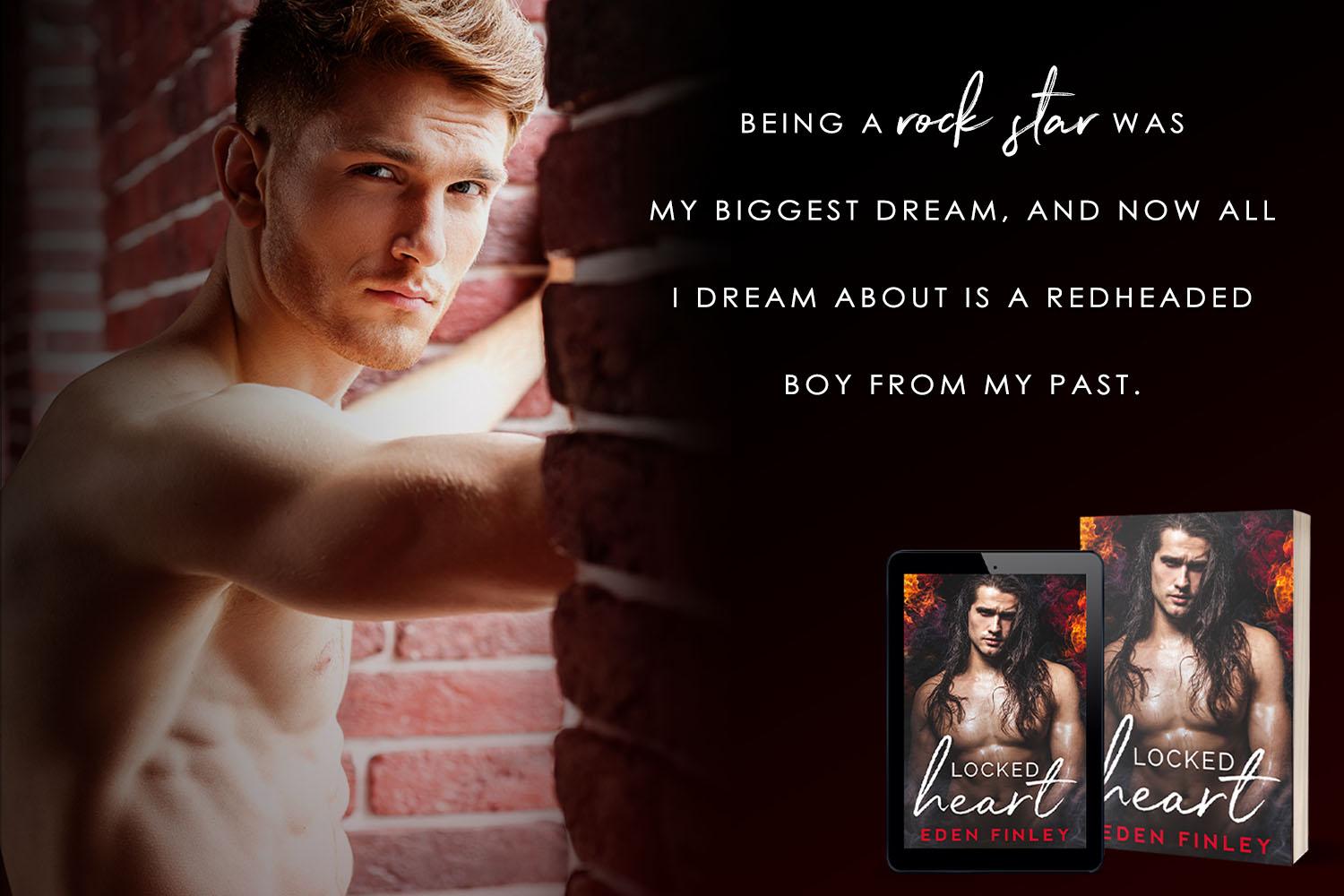 I couldn’t not come to his show. I had to at least see Cashton perform.

The plan was to watch him, maybe catch his eye and see if there’s any spark of recognition, but I couldn’t get remotely close to the stage.

I hadn’t decided if I was going to try to talk to him afterward or not. Or if I’d even be allowed.

I was fully waiting for security to tell me I’m shit out of luck, but apparently, they’d been told of my possible arrival by Cashton’s manager.

Cashton has come so far, and until the moment I saw him, until we came face-to-face, I didn’t know how I’d respond to being in his presence again.

Apparently my first response was to wrap myself around him.

Even though he was eighteen the last time I saw him and not much different to now.

He’s just … different. But I love it instead of despising it like I was worried I would.

He’s lived a long ten years, and I want to know every story, every adventure, but he’s frozen against me, and now it’s becoming abundantly clear that this is probably crossing a whole heap of lines.

I pull back but can’t help keeping my arms around him. “Cashton?”

His brown eyes blink up at me. His hair has gotten even longer than the last time I saw him, bringing back the eighties rock band look, and his tempting mouth I’ve missed so much is only inches away. Nope, closer than that.

His tongue darts out, wetting his lip.

“Fuck it, we can catch up later.” He closes the small gap between us, pressing his mouth to mine.

Damn, I remember everything about the way this man kisses. I remember his demanding tongue that liked to dominate my mouth, right up until I fought back and took control of it. Of everything.

Of his tongue, his mouth, his body …

The moan he lets out is deep and guttural, and worry about crossing lines is no longer at the forefront of my mind.

I’m still taller than him, but he used to be more muscular than me. Neither of us look like muscly gym rats, but I’ve at least filled out enough to match him in that area now. It makes me feel bigger than him, probably bigger than I actually am, but fitting myself against him, I surround him and hold him to me as if he was always mine to possess.

Cashton trembles in my arms the way he used to. The way he would when he wanted something but was too shy to ask for it.

Guess that shy thing is something he got over, then.

As much as I should pull away and slow this down, there’s no way that’s possible.

“Turn around.” My throat is scratchy and dry, putting an extra growl in my voice.

Like any time I’d told Cashton to do something in bed, he complies immediately.

Nostalgia settles over me.

I plaster my front to his back and push him toward the side of the tour bus.

His narrow hips feel amazing in my hands, and that round butt of his looks amazing framed in those tight pants.

“I’ve fucking missed this ass.” I press forward, rubbing against him with my already hard and aching cock.

I find that hard to believe when I’m sure he’s had a buffet of cocks since the one and only time I fucked him, but now’s not the time to get into that.

I’m going to take his words at face value—that he’s missed my cock now it’s pressed against him.

I run my hand down the middle of his back, and he shudders under my touch. “You gonna take me like you did ten years ago? Want me to fuck you until you can’t shake your ass onstage like I saw today? You think this ass belongs to your fans?”

“Well, it hasn’t belonged to you in ten years.”

I try not to wince. Instead, I take on that commanding, dominant role I know he loved even back then. I want to show him that even though so long has passed, I’m not all that different. I still want him crumbling for me and coming apart from my touch, my mouth, my body.

My fist tangles in his long hair, and he yelps in pain, but I don’t let up. “I have news for you. It has always belonged to me.” 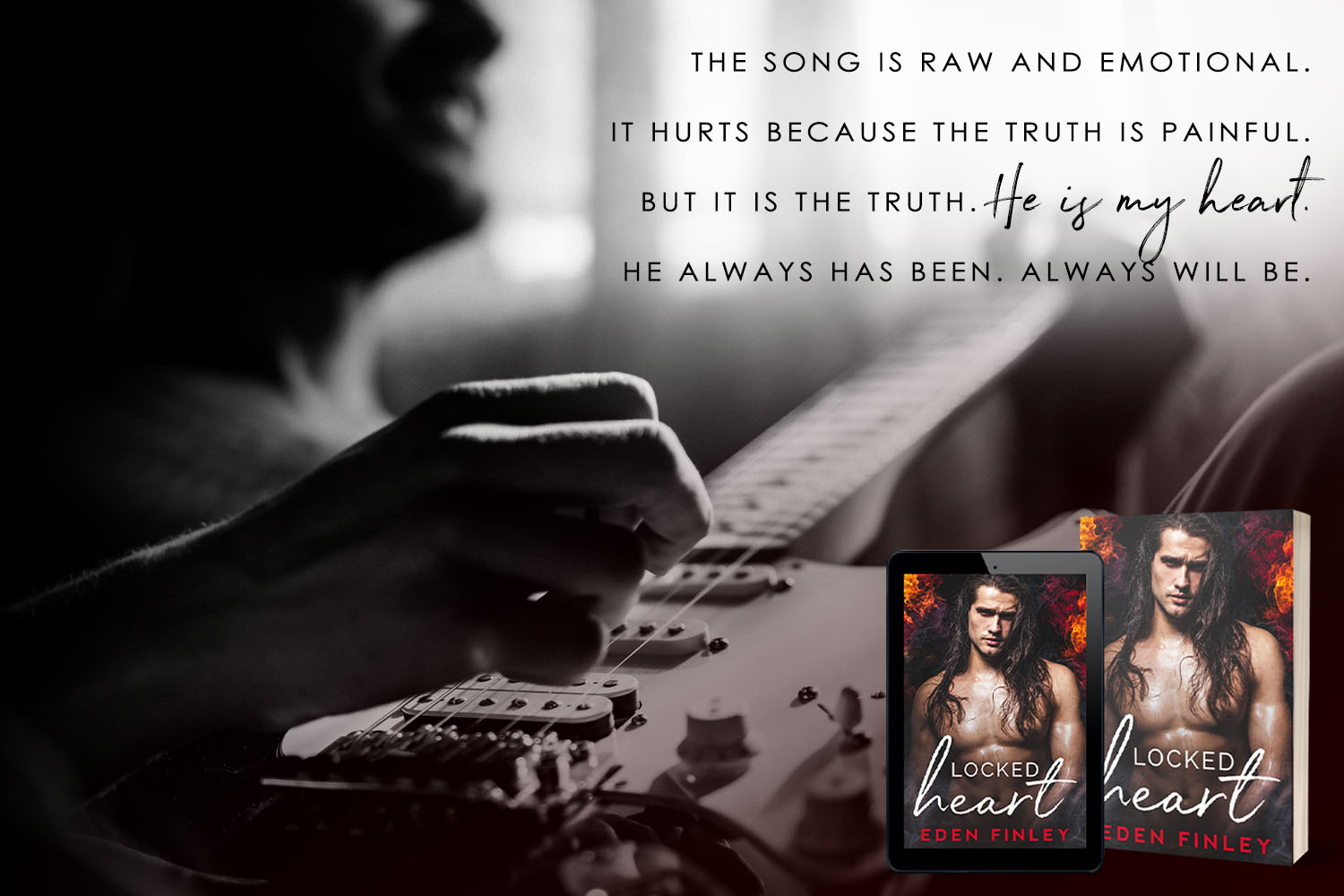 GIVEAWAY
One of Five eARC's for Locked Heart

ABOUT THE AUTHOR
Eden Finley is an Amazon bestselling author who writes steamy contemporary romances that are full of snark and light-hearted fluff.

She doesn't take anything too seriously and lives to create an escape from real life for her readers. The ideas always begin with a wackadoodle premise, and she does her best to turn them into romances with heart.

With a short attention span that rivals her son's, she writes multiple different pairings: MM, MMF, and MF.

She's also an Australian girl and apologises for her Australianisms that sometimes don't make sense to anyone else.
CONNECT WITH EDEN